Andaman & Nicobar is an archipelago of 572 islands located in between the Bay of Bengal and the Andaman Sea.

The island's blue economy such as fisheries, aquaculture and seaweed farming will accelerate in line with the growth of modern infrastructure in A&N.

In March 2021, the Union Ministry of Home Affairs (MHA) announced that it is vetting 41 proposals of projects from various sectors including road construction, hospitality and industries in Andaman & Nicobar Islands and Lakshadweep.

In January 2021, state owned power producer NTPC announced that if will deploy 14 electric buses and will also set up public charging infrastructure in the islands. Introduction of electric buses will help cut down tailpipe emissions.

The islands have been recognised as an eco-friendly tourist destination.

Development of a deep internal port draught and proposal to build a trans-shipment port in Great Nicobar at an estimated cost of approximately US$ 1.36 billion 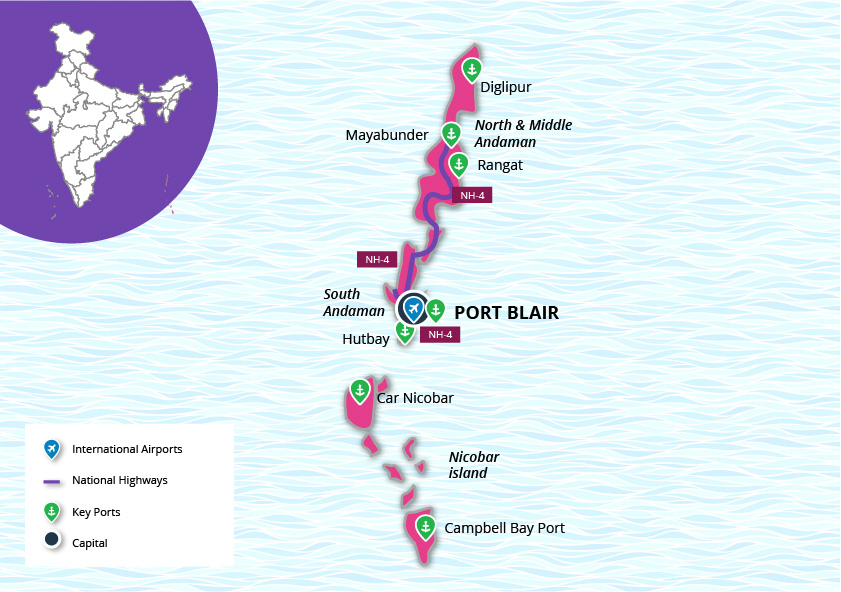 MSME units and 7 industrial estates in the UT

of A&N being under tropical rainforests, supports wood-based industries

The policy aims to incentivise startups in the UT.

The first Indian UT to have its own startup policy.

Incentives for Industries in Andaman and Nicobar islands

Leading policies and incentives for industries in the islands.

The A&N Islands have very significant marine fishery resources including lucrative fisheries of Tuna and Tuna like fishes and other species of commercial value such as groupers, snappers and other reef fishes.

Established under the “Ease of Doing Business” project undertaken by the GoI to facilitate a “Business Friendly Environment”.

The Directorate of Industries is the nodal department of A&N administration for promotion of industries.

Responsible for development, promotion and facilitation of tourism in A&N Islands, known for their palm-lined, white-sand beaches, mangroves and tropical rainforests

ANIIDCO's main objective is to develop and commercially exploit the natural resources for the balanced and environment friendly development of the territory.

ACCI was established with an idea of safeguarding the vital interests of businessmen of the Andaman & Nicobar Islands.

TripAdvisor, an American travel portal, has invested in tourism in the islands

providing a bandwidth of 2 x 200 GB has been laid between Chennai and Port Blair in order to improve connectivity, digitization, trade, and increase employment opportunities.

Panoramic view of the Havelock Island

Edible Oil production to push India towards its self-reliance goals

With an aim to make India completely self-reliant, Hon’ble Prime …

Under the aegis of Swachh Bharat Mission, in a virtual …