Wafting in far-off lands: The aroma of Indian Coffee

The world is, slowly but surely, waking up to the heady, refreshing aroma of Indian coffee. So much so that its invigorating taste and scent inspired the Indian Government to release a coffee-scented postal stamp in early 2017 with the message - “Send the aroma of coffee to your loved ones”

Many of India’s coffee varieties promote biodiversity in their cultivation region, they are eco-friendly and reflect sustainable agricultural best practices

India’s Robusta, Arabica and Peaberry coffee yield make India the sixth largest producer of coffee in the world and the world’s fifth largest exporter of coffee 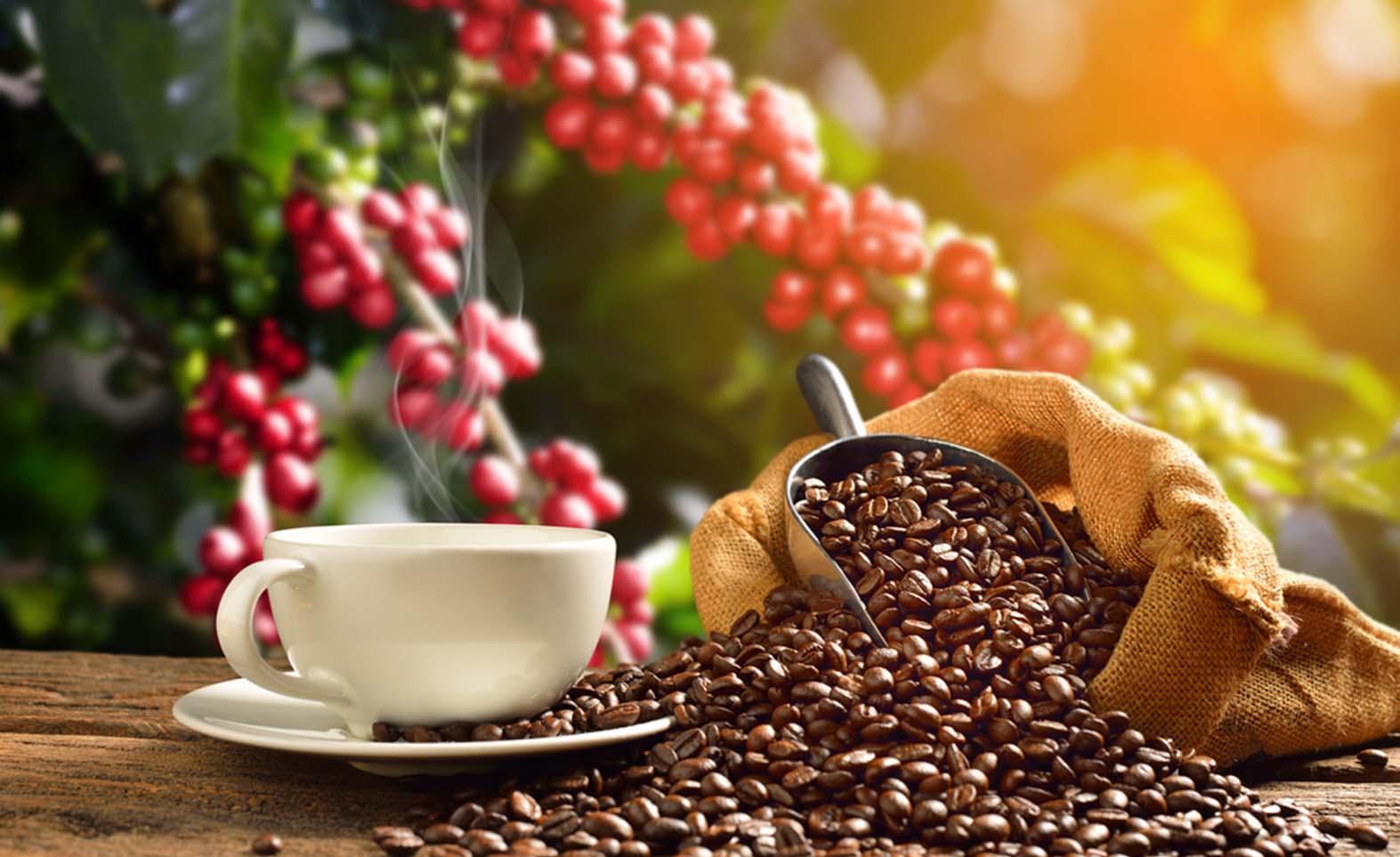 The world is, slowly but surely, waking up to the heady, refreshing aroma of Indian coffee.  So much so that its invigorating taste and scent inspired the Indian Government to release a coffee-scented postal stamp in early 2017 with the message – “Send the aroma of coffee to your loved ones”. Although Indian coffee has been making its presence felt around the world for a while now, evangelised primarily by South Indian expatriates who remain faithful to the tradition of drinking filter coffee first thing in the morning, recognition as a connoisseur brand is a recent phenomenon.

India’s specialty coffees include the popular Monsooned Malabar – a coffee that has a unique taste owing to its exposure to the monsoon winds of the Malabar coast and processed only between June and September when the south-west monsoon is intense on the west coast of the Indian peninsula. Another premium coffee, the Araku Valley Coffee is grown only by the tribal people who are native to Araku Valley  in the Eastern Ghats, near Visakhapatnam in Andhra Pradesh. The tribals have sole rights over growing and picking Araku coffee which is organically grown, under natural shade.

As a result of natural practices, this coffee growing region is bio-diverse, ecologically friendly and sustainable. Civet coffee from India is yet another specialty coffee that is slowly becoming a global gastronomic favourite. Civet coffee is produced when the finest and ripest fruits of the coffee plant is eaten by wild civet cats. The seeds ferment in the enzymes present in the cats’ guts, giving the coffee a distinct taste. Pickers collect the seeds excreted by the cats which are then washed, skinned and processed. This coffee can fetch more than US$3,500 per kilogram in the international market.

India’s specialty coffees have found strong markets in countries such as Italy, the UAE, Spain and France. Currently, Indian Robusta, Arabica and Instant coffees are exported to several nations, with Italy being the number one destination, followed by Germany and Russia. Only 4 per cent is exported to the USA. India’s Robusta, Arabica and Peaberry coffee yield make India the sixth largest producer of coffee in the world and the world’s fifth largest exporter of coffee. With coffee consumption increasing around the world, the market is ripe for making things happen over a cup of coffee.

In 2016-17, India harvested 312,000 metric tonnes of coffee, including some of the best Robusta. India’s espresso grade Robusta is one of the cleanest and mellowest, having none of the rubbery aftertaste normally associated with such coffees. What gives the particular variety this edge is the extreme care which coffee growers take – growing coffee plants in the shade, picking fruits only after they ripen, meticulous care while washing and pulping and a high degree of quality consciousness during grading. Of the local varieties, the exotic connoisseur brands primarily cater to the export market.

India’s tryst with coffee dates back to around 1600 AD, when Baba Budan, a Sufi saint living in a cave on a hillock that girdled Chikmagalur, a hill station in the southern state of Karnataka, travelled on a pilgrimage to Mecca. Journeying via his original hometown of Mocha in Yemen, he chanced upon a dark, refreshing drink produced from the berries of plants that were closely guarded by the Yemeni people. In those days, the Arabs maintained a strong monopoly over the coffee trade and kept a watchful eye on its propagation and production. Baba Budan smuggled seven precious berries out of Mocha and on returning to India, he planted them around his cave.

Over the years, India’s coffee cultivation has expanded from the traditions terrains of Karnataka, Kerala and Tamil Nadu to newer territories in Andhra Pradesh, Orissa, Assam, Arunachal Pradesh, Manipur, Meghalaya, Mizoram and Nagaland.

The seeds took root, and soon, the plant started bearing fruit. The coffee plants spread slowly, to cover the area that is now called Baba Budan Hills. Coffee had come, to stay in India. Over time, coffee plantations grew beyond Baba Budan hills near Chikmagalur and spread to Kodagu and Hassan in Karnataka and Wayanad, Travancore and Nelliyampathy regions of Kerala. It is also grown in the hilly regions of Palani, Shevroy, Nilgiris and Anamalais in Tamil Nadu. Of late, there has been a proliferation of non-traditional coffee-growing territories such as those in Andhra Pradesh, Orissa, Assam, Arunachal Pradesh, Manipur, Meghalaya, Mizoram and Nagaland.

It is interesting to note that the Coffee Board of India has filed an application for geographical indication (GI) tagging of Baba Budangiri Arabica and four other varieties — Coorg Arabica, Wayanad Robusta, Chikmagalur Arabica and Araku Valley Arabica, with the Geographical Indication Registry. The GI tag ensures that only those registered as authorised producers and residing within a specified geographic territory are allowed to use the popular product name. Banganapalli mangoes, Darjeeling tea and Malabar pepper are examples of GI tagged agricultural products.

Today, the Coffee Board of India is also profiling a variety called Selection-795, considered to be the natural descendant of two of the oldest African cultivars of coffee — Coffea Arabica and Coffea Liberica. The board is also profiling a third coffee variant called Kent. Decaffeinated coffees, organic coffees, high-grown coffees, single-estate coffees and variety coffees such Kents, Agaro, Cioccie, CxR are only some from the vast coffee variants that India offers to the international market.

Multinationals to startups in coffee

Spotting a large business opportunity, domestic brands and chains such as Café Coffee Day, Bru, Tata Coffee as well as international chains and brands such as Nescafé, Starbucks, Costa Coffee and Di Bella coffee have set up shops in India, to cater to the young, upwardly millennials. India has also opened its eyes to startup experiments such as micro-breweries where freshly roasted coffee is served to customers. The Indian coffee experience is now customized – milk-fermented coffee, alcohol-coffee – to suit different tastes.

While these outlets are visible  across India, foreign investors have identified other coffee-related business opportunities, such as farm machinery and implements for cultivation, pulping and sorting of coffee beans, warehousing facilities, packaging material and coffee-tourism.

Many of these independent, yet ancillary services and products linked with the growing Indian coffee industry were showcased at the International Coffee Fair held in Bengaluru in January 2018. At the event, Germany-based coffee roasting machine maker Probat conducted a skill-building workshop on modern profile roasting, while Switzerland-based Buhler AG and Brazil’s Lilla Roasters made presentations on profile roasting of single estate coffees and assessment of roasting loss and cupping quality.

Special workshops were also conducted on coffee brewing, extraction of a perfect cup of espresso using Indian and international beans and on the art of making a perfect cup of cappuccino. The fair also had something for individuals who were interested in picking up branded coffee from the Coffee Board of India, different coffee making and filtering equipment. With the young generation increasingly embracing coffee as the beverage of choice, expect more people to wake up to the smell of Indian coffee.