India’s Union Budget 2021-22 was presented by FM Smt. Nirmala Sitharaman on the 1st of Feb, 2021 with new provisions and schemes to empower the growth of the Indian economy.

India’s first Digital Budget was presented this year via a tablet of Make in India origin.

Fiscal Deficit is estimated to contract from a 9.5% of GDP to a 6.8% in the past one year.

The budget, resonating the vision of Atmanirbhar Bharat is presented under the aegis of 6 pillars.

India producing two vaccines, Covaxin and Covishield, is the fastest nation to reach the 4 mn mark. 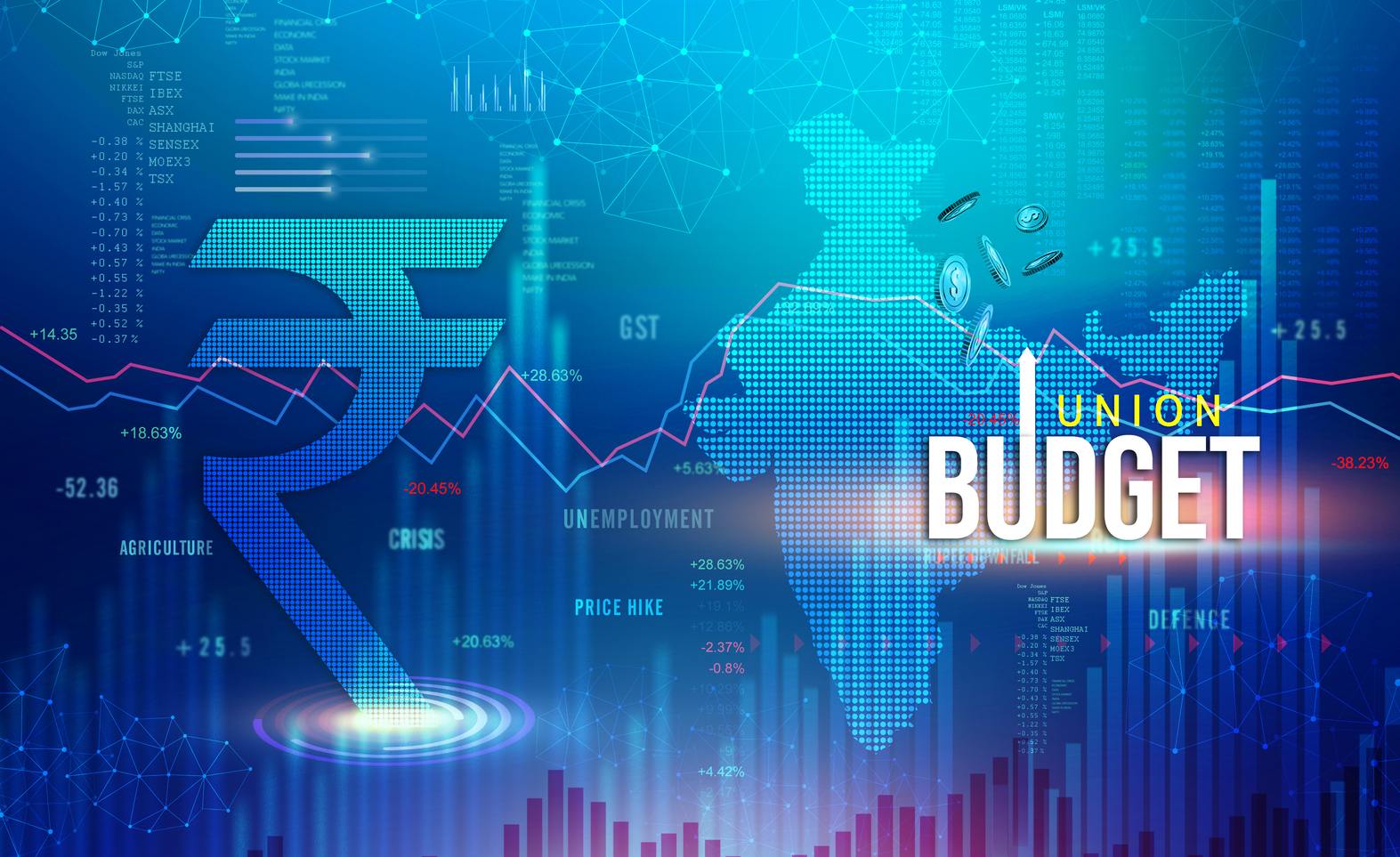 The Union Budget of 2021-22 was presented by Finance Minister (FM) Smt. Nirmala Sitharaman on February 01, 2021. In lieu of the annual norm of reading from the “Bahi Khata” the FM, encouraging Digital India and Make in India initiatives, came up with the nation’s first digital budget containing schemes to continue to empower multiple sections of society along with the various sectors of the economy given the unprecedented recession triggered by the global pandemic. To facilitate economic recovery from the pandemic, the Government of India launched the Atmanirbhar Bharat Scheme (Self-Reliant India) in three tranches, which when combined with the RBI reforms created a financial impact of US$ 371.45 bn. Ancient India was largely self-reliant and a business epicenter for the world. The recent Atmanirbhar Bharat initiative provides a platform to the 1.3 billion Indians to express their capabilities and skills. The Budget of FY22 resonates with the vision of Atmanirbharta (self-reliance) and rests on the 6 pillars mentioned below:

The investment on health infrastructure in this budget has increased substantially to US$ 30.7 bn in BE 2021-22 which is a 137% increase than the previous year. Facilitating improved health systems, a new centrally sponsored scheme, PM Atmanirbhar Swasth Bharat Yojana, will be launched with an outlay of about US$ 8.8bn over 6 years. Through this scheme, the government will provide support to 17,788 rural and 11,024 urban health and wellness centres, set up health labs in all districts, establish critical care hospital blocks in 602 districts and 12 central institutions other health emergency operation centers and mobile hospitals in addition to 4 regional National Institutes for Virology. An outlay of US$ 39.35 bn has been provided to launch universal water supply in all 4,378 Urban Local Bodies with 28.6 million household tap connections as well as liquid waste management in 500 AMRUT cities, under the aegis of Jal Jeevan Mission (urban). The Pneumococcal Vaccine, a Made in India product, which is currently limited to only 5 states, will now be rolled out across the country and in aid the vaccine against COVID-19, the budget shall provide US$ 4.8bn.

To become a US$ 5 trillion economy, the manufacturing sector must grow in double digits on a sustained basis. For this the government has committed nearly US$ 27 bn, over 5 years starting in FY 2021-22. This initiative will help bring scale and size in key sectors, create, and nurture global champions and provide jobs to the youth.  The National Infrastructure Pipeline (NIP), an unparalleled government exercise which was launched with 6835 projects has now been expanded to 7400 projects. Railways will monetise Dedicated Freight Corridors (DFC) assets, both Eastern and Western, for operations and maintenance. The Capital Budget will see an increase from US$ 56.49bn to US$ 76bn (34.5% more than BE 2020-21) and US$ 27.4bn would be provided to State and Autonomous Bodies for their Capital Expenditure. For Highways and road transport, an enhanced outlay of US$ 16.2bn is being provided out of which US$ 14.84bn is for capital, the highest ever.

Despite the pandemic, India has incessantly worked towards a strategic disinvestment of public sector enterprises. To incentivize states to take to disinvestment of their Public Sector Companies an incentive package of Central Funds for States shall be proposed. The budget includes an estimation of US$ 24bn as receipts from disinvestment in the BE 2021-22 To ensure a future ready Indian railway system by 2030, the budget of FY22 proposes to provide a sum of US$ 15.1bn out of which US$ 14.68bn is for capital expenditure. In regards to Urban Infrastructure, a new scheme will be launched at a cost of US$ 2.47bn to support augmentation of public bus transport services. Currently, a total of 702 km of conventional metro is operational and another 1,016km of metro and RRTS is under construction in 27 cities. Two new technologies will be deployed to provide metro rail systems in Tier-II cities and peripheral areas of Tier-I cities.

The rapidly developing Power sector has been allocated an outlay of US$ 42bn over 5 years, which will help DISCOMS for infrastructure creation. In the PNG sector, a 100 more cities are being added to the City Gas Distribution Network (CGDN) and a gas pipeline project will be taken up in the UT of J&K. To streamline the ‘Ease of Doing Business’ for Cooperatives, the government will set up a separate Administrative Structure for them.

This pillar will cover Agriculture and Allied sectors, farmers’ welfare & rural India, migrant workers & labour, and financial inclusion. Earlier this year, PM had launched the SVAMITVA Scheme which in accordance with this years’ budget will extend to cover all states/UTs. Allocation to the Rural Infrastructure Development Fund has been increased from US$ 4.11bn to US$ 5.48bn. The 5 major fishing harbours at Kochi, Chennai, Visakhapatnam, Paradip, and Petuaghat will be developed as hubs of economic activity. To encourage Seaweed farming, an emerging sector, the government has proposed a Multipurpose Seaweed Park in Tamil Nadu. Conforming to its principle of inclusivity and aiming to transform India’s unorganised sector into an organised one, a portal will be launched to collect all relevant information on gig, building and construction workers inter alia, to help formulate Health, Housing, Skill, Insurance, Credit, and food schemes for migrant workers. To support MSMEs, US$ 2.15bn will be provided to the sector, which is more than double of this year’s BE.

Under the National Education Policy (NEP), more than 15,000 schools will be qualitatively strengthened to include all its components. For accessible higher education in Ladakh, a proposal of setting up a central university in Leh has been made. Many other initiatives are underway with other countries like UAE and Japan to facilitate skilling and migration of skilled workers.

For the National Research Foundation an outlay of US$ 6.86bn over 5 years will be given to ensure strengthening of the overall research ecosystem. In the Space sector, as part of the Gaganyaan Mission, 4 Indian astronauts are being trained in Russia. For deep ocean survey and projects for the conservation of deep-sea biodiversity, a Deep Ocean Mission has been launched with a budget outlay of more than US$ 0.55bn, over 5 years.

This particular pillar outlines plans for reforms in one of the core principles of minimum government, maximum governance. This includes bringing in reforms in Tribunals for speedy delivery of justice. The introduction of the National Commission for Allied Healthcare Professionals Bill in the parliament to ensure transparent and efficient regulation of the 56 allied healthcare professions. In addition to this, the National Nursing and Midwifery Commission Bill will be introduced to bring about transparency, efficiency, and governance reforms in the nursing profession. For the welfare of Tea workers, especially women and children in Assam and West Bengal, US$ 0.14bn has been proposed.

A new old order seems to be emerging, one in which Asia is poised to occupy a prominent position and India will have a leading role therein. In a country as economically diverse as India, a well-planned budget is of utmost importance to ensure economic stability and growth.