Pioneering work of women scientists in India gets a boost

Of late, Indian women scientists are being honoured and recognized for their path-breaking work and their valuable contributions in the field of science and technology

The Indian National Science Academy, achieved a key milestone, when a woman scientist, Chandrima Shaha was elected president for the first time in its 85-year-old history

In an effort to inspire more women to join science, the Government has established Chairs in the name of 11 early 20th century women scientists across institutions in the country

Among these illustrious 11, is the first woman to receive a D.Sc from an Indian University: Dr. Asima Chatterjee, whose research led to the development of an epilepsy drug 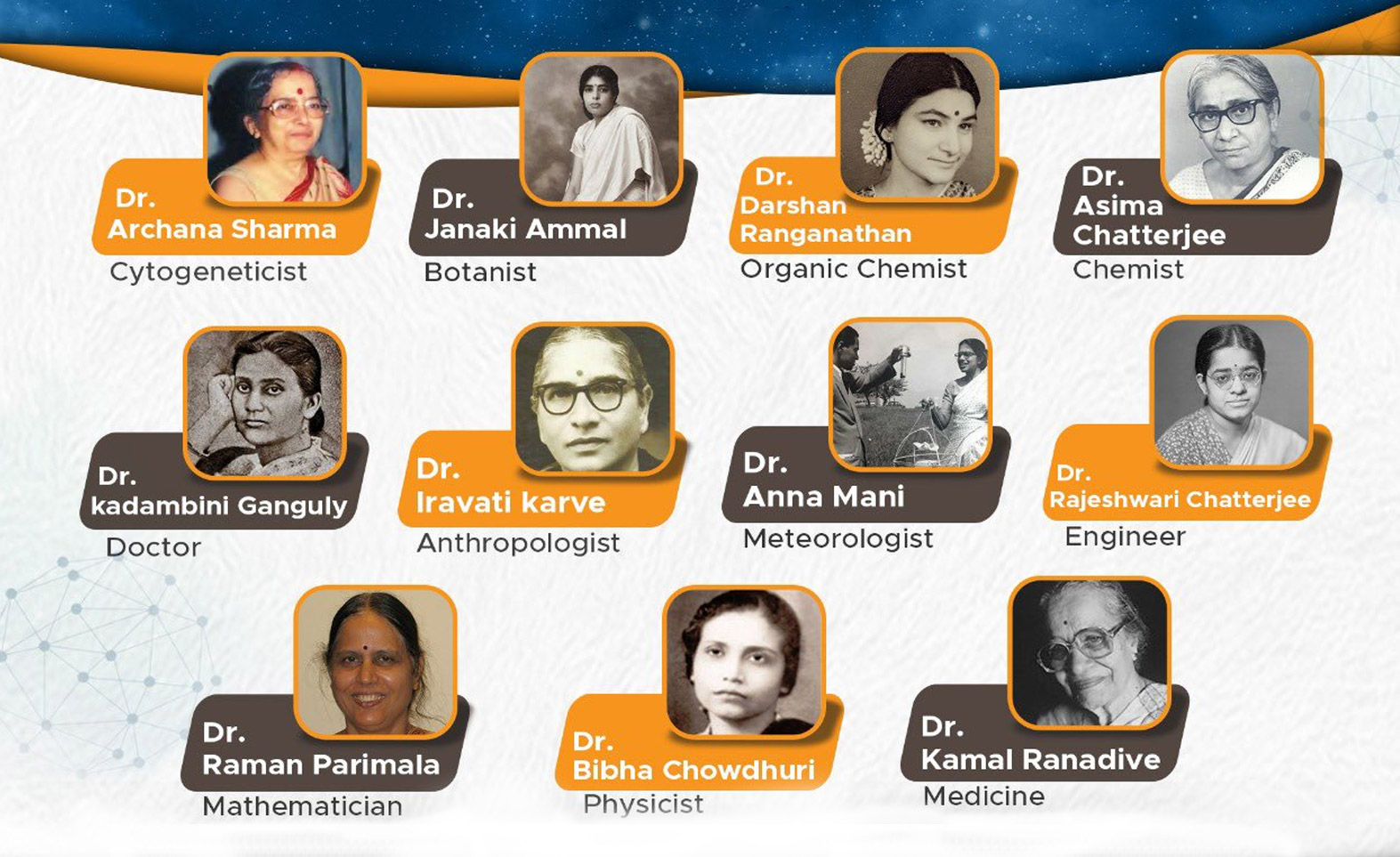 The Zariski Cancellation problem had intrigued some of the greatest math minds of the world since it was first posted in 1949. The problem, set by Oscar Zariski (1899-1986), one of the founders of modern algebraic geometry remained unsolvable for over seven decades despite attempts by several eminent mathematicians to solve the problem.

Finally, a few years ago, it took a young Indian mathematician, Neena Gupta, an associate math professor at the Indian Statistical Institute, Kolkata to crack this challenging math conundrum. Her ingenious solution has given both insights and inspiration to young researchers to initiate further research into other associated conjectures which remain open. And won her the prestigious Shanti Swarup Bhatnagar Prize (SSBP) (a state award instituted to honour outstanding research) last year, making her one of the youngest mathematicians to receive this recognition.

More Indian women scientists are surfacing for their pioneering work in their areas of specialisation and are being honoured and recognized for their contribution to science.

However, in the recent past, more Indian women scientists are surfacing for their pioneering work in their areas of specialisation and they are being honoured and recognized for their strong contribution to science.

For example, India’s premier scientific society, the Indian National Science Academy (INSA) achieved a key milestone, when a woman scientist was recently elected president for the very first time in its 85-year-old history. Chandrima Shaha, a biologist, who has received many awards for her significant contributions towards unraveling the mechanisms of cell death processes, assumed office on January 1, 2020.

Shaha, who did her post-doctoral work in reproductive biology at the University of Kansas Medical Centre, is known for her extensive research on the Leishmania parasite, which causes Kala- Azar, a fatal parasitic disease.

In another example, in 2019, Gagandeep Kang, the executive director Translational Health Science and Technology Institute in Faridabad, became the first woman from India to be elected as Fellow of the Royal Society in London. A forerunner in the field of diarrheal infections, she developed India’s first indigenous vaccine for rotavirus infections that causes gastroenteritis.

From being able to determine the growth of a bacteria cell wall of bacteria to facilitate new classes of antibiotics to studying the impact of experiences and stress on brain circuitry, these women are vigorously pushing the frontiers of science to offer unique insights and revolutionary results.

Another female scientist, the award-winning Aditi Sen De from the Harish-Chandra Research Institute in Allahabad, who has made considerable contributions to quantum information and communication, became the first woman physicist to bag the SSBP in 2018. De’s interest in quantum computing, which can help solve certain problems faster than conventional computers and transmit data that cannot be encrypted, began during her master’s degree in applied math in Kolkata. De was accepted for a Ph.D. at the University of Gdansk in Poland to work with one of the best theoretical groups in quantum information.

Passion for exploring the unknown

Most of these top women scientists in India are drawn to science by a deep-seated passion to solve a problem or delve into the unknown to come up with solutions for the issues plaguing the world. Gupta says in an interview in Research Matters that the “thrill” of solving problems based on mathematical theories is her greatest motivation.

This is also the case with the bacterial geneticist, Dr. Manjula Reddy, who won the $100,000 Infosys Prize in Life Sciences (another prestigious Indian award) in 2019, is prompted by a passion and love for “exploring the unknown”. Dr. Reddy and her colleagues have revealed critical steps of cell wall growth useful to understand bacterial biology and to develop new classes of antibiotics.

Being ignored by male colleagues in her early days as a scientist made Chandrima Saha more determined to pursue her passion. Moreover, probing the mechanisms of cell death, she says in a media interview, “The excitement of looking at the core of your life — cell — was something that inspired me. I used to sit with the microscope for hours, staring at cells. It was that sheer excitement of looking at life that inspired me.”

Vidita Vaidya, a professor in the eminent Tata Institute of Fundamental Research (TIFR) in Mumbai, was fascinated by the idea of behaviour watching documentaries of primatologists Jane Goodall and Dian Fossey. Her research on the circuitry of the brain that regulates emotional behaviour is expected to eventually translate to better treatments and psychiatric medications in the future. A senior overseas research fellow of Wellcome Trust, UK, she too bagged the SSBP in 2015.

Make in India in science and technology

Most of these women scientists have left lucrative jobs abroad to return to India to create an impact and solve for India. After her Ph.D. in computer science from the University of California, Berkeley, and a stint at Carnegie Mellon, Sunita Sarawagi returned to India to put her country on the world research map. This was in 1999 when the software boom and the American dream were much-sought-after by Indian techies.

In between, for two years from July 2014, as a visiting scientist at Google Inc., she worked on increasing the diversity of recommendations made in applications like YouTube, which use machine learning-based models. Working in the “bowels of machine learning”, as she puts it, this Infosys Prize winner’s dream is to use machine learning and artificial intelligence to improve the level of primary education in India.

Dr. Gagandeep Kang credits her innovative approaches and her commitment to public health to her alma mater, the renowned Christian Medical College in Vellore. “That training is incredible. There is no way you cannot think of public health in all that you do,” she says in a media interview. She began focusing on diarrhea and viral gastroenteritis but is now investigating gut infections, particularly in children for decades. Dr. Kang is also building typhoid surveillance networks and a roadmap for cholera.

Another woman scientist in India doing creditable work in her field is Farah Ishtiaq, a senior scientist at the Tata Institute for Genetics and Society. One of the few scientists in south Asia to research avian malaria, her fieldwork spans seven sites in the Himalayas where she monitors bird migration, temperature gradient and what parasites birds are carrying, among other things.

The study was done by Ishtiaq, a recipient of the Wellcome Trust, UK/Department of Bio-Technology India Alliance and Marie Curie fellowships can impact research on human malaria. It was a postdoctoral offer from The Smithsonian, the US to study the extinction of native Hawaiian birds due to diseases like malaria that changed the course of Ishtiaq’s life and career.

Reaching for the skies

Recently, two women scientists made history when they spearheaded the Indian Space Research Organisation expedition to the moon – Chandrayaan-2. While Muthayya Vanitha was the project director, Ritu Karidhal was the mission director and 30 per cent of the team working on the project was women. Vanitha, an electronics systems engineer was an earlier deputy project director in data systems for Indian satellites like Oceansat-2, while Karidhal, an aerospace engineer was deputy operations director of Mars Orbiter Mission, a space probe orbiting Mars since 2014. She was responsible for designing India’s frugal mission to Mars, success at the very first attempt.

No doubt, Indian women have had a presence in the sciences for well over a century, from the time the first Indian woman, Dr. Anandibai Joshi fought all odds to travel to foreign shores to get her medical degree way back in 1885. But, they were far and few.

In an effort to attract and inspire more women to join science, the government recently decided to establish Chairs in the name of 11 early 20th century women scientists across institutions in the country in recognition of their work.

These women have made important contributions to science in their lifetime: for example, there is Dr. Archana Sharma born in 1932, who developed her technique of studying chromosomes in flowering plants which enabled a new classification. A chair will be established in her name in any institute of the Indian Council of Agriculture Research (ICAR), an apex body managing research and education in agriculture.

While Dr. Janaki Ammal, who left behind a flourishing career on foreign shores to return to work in India in 1951, is credited for developing a sweeter variety of sugarcane and has a small-flowered variety of the magnolia plant named after her. After receiving a DSc from the University of Michigan as the first Oriental fellow, Dr. Ammal joined the John Innes Horticultural Institute in London from 1940 to 1945. She died in 1984 at 87 years, working in a lab in Chennai.

Among these illustrious eleven is Asima Chatterjee, a chemist, born in 1917, whose research led to the development of an epilepsy drug. This scientist, who has the distinction of being the first woman to win the SSBP, has done some noteworthy work in organic chemistry and phytomedicine.

Senior scientists like Chandrima Shaha believe the tide is turning today for women scientists in India. Attitudes are changing and the society is on a “self-correcting mode”, she believes. Besides diversity in science is very important, women, by nature, are sincere and must participate in a larger way towards the country’s scientific endeavor, she says. And, the first steps or rather the first leap has been taken.

The Department of Science and Technology (DST), India has started several initiatives to promote women in science. Besides the Indo-U.S. Fellowship for Women in Science, Technology, Engineering, Mathematics and Medicine (WISTEMM)program, which aims to provide opportunities to Indian Women scientists, engineers and technologists to undertake international collaborative research in premier institutions in the US, DST restructured all women-specific programmes under one umbrella called Knowledge Involvement in Research Advancement through Nurturing (KIRAN), which encompasses women-exclusive schemes and encourages them to foster their career researching science and technology (S&T). The Women Scientist Scheme (WOS) meanwhile addresses challenges faced by S&T qualified women primarily due to social responsibilities.