Manufacturing sector investments up by 20.9% in FY20

There was a 1.7% increase in the number of factories in the country, from the previous fiscal

Employment in the corporate sector, including both, government and non-government companies, increased by 5.5% to 9.7 million in FY20

The workforce in factories grew by 2.02% to 10.3 million workers 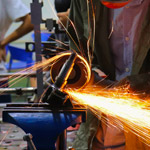 Investments in India’s manufacturing sector increased by 20.9% in FY20, compared to the previous year, according to the Ministry of Statistics and Programme Implementation in its final Annual Survey of Industries (ASI).

As per the report, a 20% increase was shown in the provisional estimates for May in the said year. The Gross Fixed Capital Formation (GFCF) in 2019-20 was INR 4.16 lakh crore compared to INR 3.44 lakh crore in FY19. There was a 1.7% increase in the number of factories in the country, from the previous fiscal.

The report further added that employment in the corporate sector, including both, government and non-government companies, increased by 5.5% to 9.7 million in FY20.

Employment in limited liability partnerships (LLPs) increased by 42% to about 122,00 in the same year. Individual proprietorship and the partnership sector saw a decline in employment by 3.1%, to 1.1 million, and 11.7% to almost 1.9 million, respectively.

Tamil Nadu, followed by Gujarat, and Maharashtra had the highest number of employment of workers in factories, among States.

ASI shows the most comprehensive data on organised manufacturing in India, which covers all factories employing 10 or more workers using power and those employing 20 or more workers without using power. It is the principal source of the country’s industrial statistics, excluding data from defence establishments, oil storage & distribution depots, restaurants, hotels, café & computer services, and departmental units such as railway workshops.