India’s robotic startup industry is slowly gaining traction as the demand for robots for industrial use increases; Growing capabilities in next-gen technology innovation and manufacturing is driving this growth

Sales of industrial robots in India reached a record high of 4,771 units in 2018, which is an increase of 39 per cent from the previous year

India’s manufacturing sector is turning to automation and new-age technologies to get in step with industry 4.0 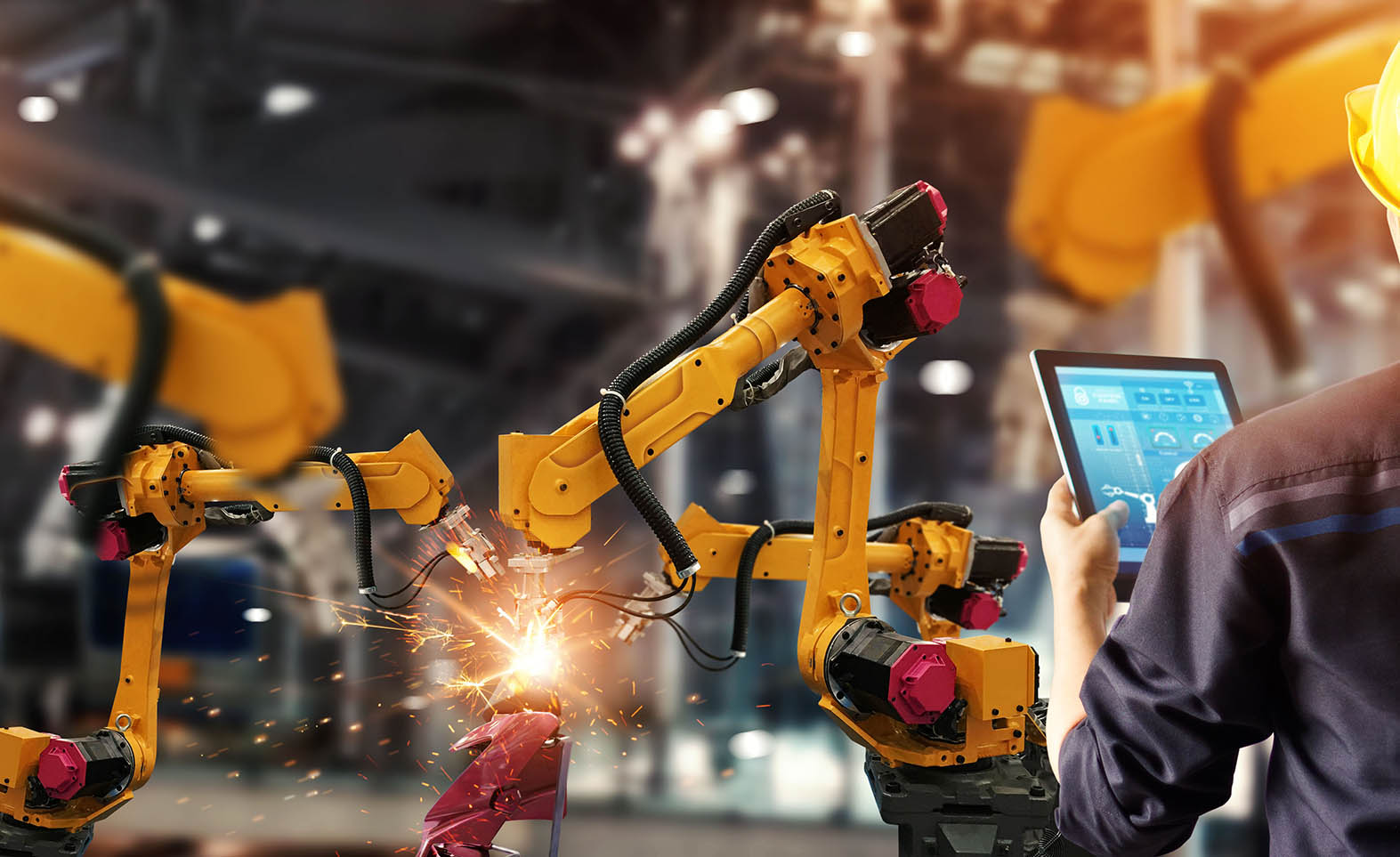 Globally, robot installations have risen crossing the 400,000 mark. A record investment of US$16.5 billion has gone into this sector worldwide in 2018, with the automotive industry remaining the largest adopter of robots with a share of almost 30 per cent of the total supply. These are latest figures released by Germany-based non-profit organisation, International Federation of Robotics (IFR) in its World Robotics Report in October 2019.

Though India’s robotic startup industry is nascent, it seems to be growing fuelled by rising demand for industrial robots. According to a press release, India’s Robot Wonder released by the IFR, the number of robot installations in India is growing rapidly for several years now. The sales of industrial robots in India reached a new record of 4,771 new units in 2018, which is an increase of 39 per cent compared to the previous year, declares the same report.

Though India’s automotive industry, the fourth largest in the world remains the biggest customer with a share of 44 per cent of total robot installations in the country, the strongest growth driver in 2018 has been the general industry, consisting of the rubber and plastics industry, metal industry and electrical/electronics industry. It is growing at a rate of 28 per cent.

Robot use in non-automotive manufacturing is catching up with the automotive sector, says the press release. Also, recent data from Tracxn, which tracks startups and emerging innovative sectors, show that industrial robotics startups in India have raised US$216 million so far. The arrival of humanoid robot maids and nurses have to wait since consumer robotics funding is still heavily skewed towards the US and Japan, with Israel and South-East Asia making inroads into the market.

Rise of the robots

India’s robotic startup ecosystem has been seeing a lot of traction. For example, in July 2019, US global aerospace and defence company Lockheed Martin signed an MoU with a Kochi-based robotic startup to develop robots to test the avionics display of their fighter jets, including the F-21. The robotic Indian startup Sastra Robotics, which builds innovative robotic platforms for product testing and review in the manufacturing industry, will be mentored by this US giant and probably become their supplier in the near future.

Last year, the Walmart-owned Flipkart, India’s largest e-commerce firm announced that for the first time they had deployed 100 robots to help sort out packages, according to their location at one of its delivery hubs in Bengaluru. The robots were able to process over 4,500 packages in an hour helping the e-commerce firm to streamline its supply chain. German auto-component maker, Bosch’s Bidadi plant has cobots or collaborative robots, working alongside humans.

India’s manufacturing sector, which is turning to automation and new-age technologies to get in step with industry 4.0, is fast adopting smart factories and intelligent warehouses to boost production.

As robots gain ground in India steadily, many deep-tech robotic startups are emerging on the Indian startup landscape. Indian startups, which are growing at 12 to 15 per cent with a cumulative valuation of US$56-62Bn, are seeing a surge in deep tech startups, says a NASSCOM study. There are 30 plus robotic startups in multiple fields such as health tech, automotive, industrial manufacturing, fintech, consumer robotics, and defence today.

The innovations are varied: there is weed spraying robotic solutions for small cotton farmers from a Bengaluru-based agritech and robotics platform startup TartanSense; robots for waterless cleaning of solar panels from Nocca Robotics; a manual scavenger robot, Bandicoot by Genrobotic Innovations; robots to entertain kids like Miko from Mumbai-based creator Emotix and humanoid robots to greet visitors at banks, restaurants and tech events in India by Bengaluru-based Invento Robotics.

One of the biggest success stories in this sector, however, has been Grey Orange, which designs and manufactures AI-powered robots for flexible automation in fulfillment centres. This company started by BITS Pilani Samay Kohli and Akash Gupta in 2011, deploys its advanced robots in over 70 client fulfillment centres across India, Japan, Europe, Latin America, and the US and has carved a niche for itself in the global warehouse automation and robotics circuit.

Grey Orange has become a global company, moving its headquarters to Singapore but has a regional office and an R&D centre in Gurgaon. Other regional offices are located in Hong Kong, Japan, and the UAE.

The company uses its deep domain expertise with world-class hardware and software engineering to optimise logistic and supply chain processes across the world with their products. Their solutions include Butler, an AI-enabled autonomous robot that speeds up the supply chain process from inventory storage, replenishment to order picking; Sorter, a conveyor belt-based system that segregates packages according to zip codes, weight and volume, and their latest product, Flexo is an AI-enabled modular sortation system useful for postal and courier firms.

Investor funding is also not far behind with such success stories. Robotics startup Grey Orange has raised funding a couple of times in its nine years of existence. The most recent was in September 2018, when it raised US$140 million in Series C funding at a reported valuation of US$400 to US$500 million. According to a Grey Orange press release, Mithril Capital led the round, which included Binny Bansal, Flipkart founder and other existing investors, including Blume Ventures.

Besides Grey Orange, several robotic startups have attracted investors. In March 2019, TartanSense received US$2 million in seed funding led by Omnivore, Blume Ventures, and BEENEXT. The startup plans to scale its first product, BrijBot, a weed spraying robotic solution for small cotton farmers with this funding. In August, Emotix, which makes the companion robot Miko raised around US$7.5 million in its Series A round, led by its existing investors Chiratae Ventures and YourNest Venture Capital.

Indian robotic startups can push the boundaries of technology with their prowess in software and digital applications, say investors. And that sets them apart. For example, Bengaluru-based CynLr, which recently raised US$790,000 in funding from Speciale Invest and Arali Ventures, is solving a fundamental problem that robots face in picking up randomly aligned objects.

CynLr uses computer vision to enable a robotic arm to pick up an object, see what it is and place it in a slot. This startup has investors like Bay Area investor Raju Reddy as well.

Investors are banking on these startups since they anticipate momentum to pick up in this sector due to India’s large and promising engineering and tech talent pool. Robotics requires talent in multiple streams like computer science with electrical and mechanical engineering. Experts say that software such as AI, natural language processing and computer vision that provide differentiation drives the industry. When it comes to data analytics, artificial intelligence, and machine learning, India has a lot to offer, say industry experts.

Higher education institutes such as IIT Madras are offering an Interdisciplinary Dual Degree program in Robotics and is poised to start a Robotics Research and Teaching Laboratory.

The future is here

The adoption of robots in India is still low compared to the US, Japan, China, Germany, etc. India still has a long way to go but with increasing awareness, the market is slowly opening up. There are challenges like a lack of a hardware ecosystem, financial incentives, critical human resources and willingness to deploy robots. It takes time to build a differentiated value proposition with robots for a global market and right now, Indian engineers exposed to different aspects of the robotics value chain in global organisations are identifying gaps to launch startups.

If policymakers and industry bodies can develop more talent with niche skills, improve exposure to applications and technologies and facilitate a nurturing environment, Indian robotic startups can very easily innovate for the world.