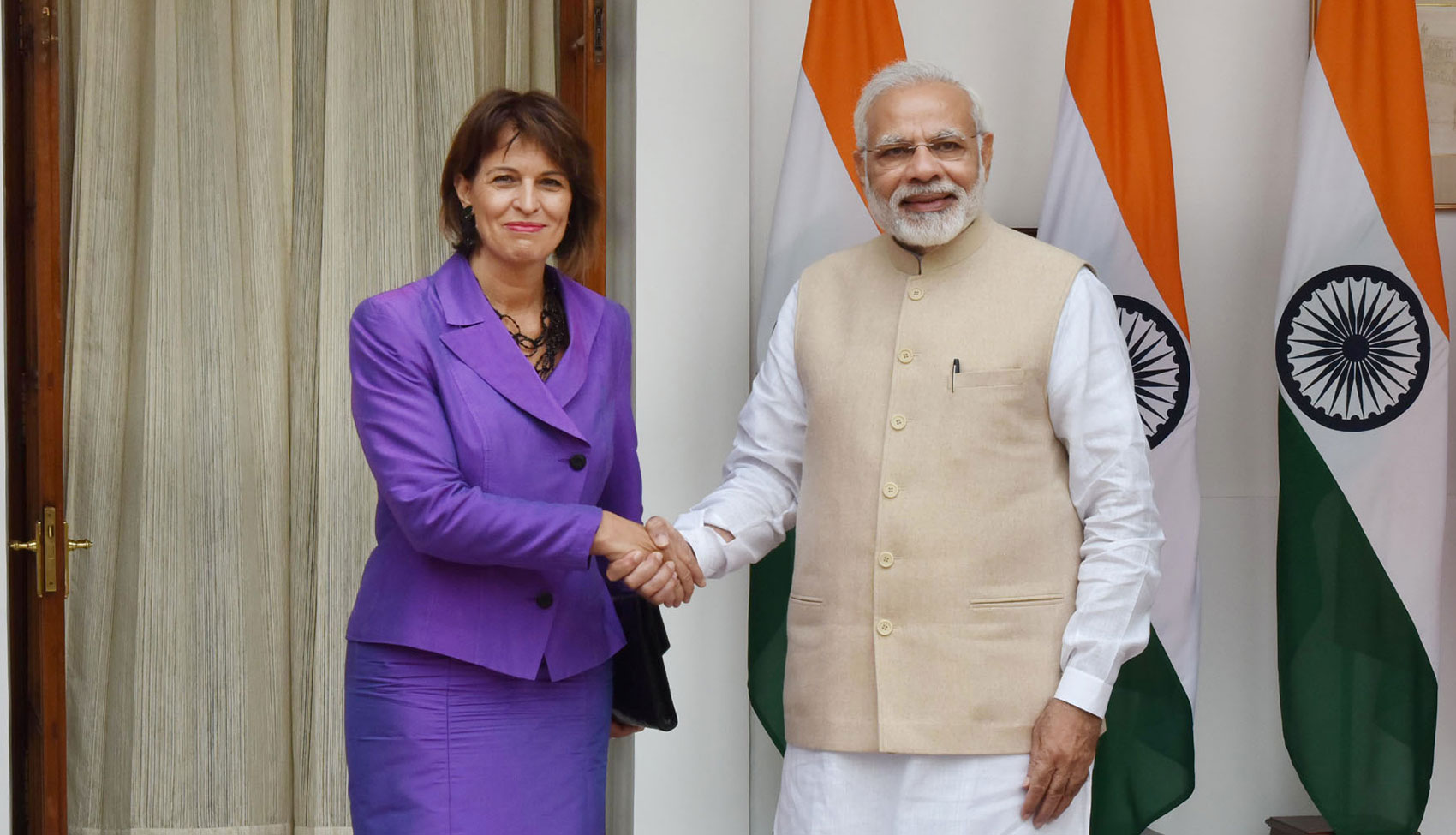 The long-standing Indo-Swiss ties are all set to get a new boost in the aftermath of the Swiss President Doris Leuthard’s visit to India. Both countries have jointly resolved to deepen their bilateral ties, accelerate economic ties through trade agreements and have frequent political dialogues between the two foreign ministers on major areas of mutual interest. This pledge to bolster their relationship was made by the leaders in a joint statement, during the Swiss President’s three day visit to India, along with a high-level 30-member business delegation. The cordial relationship between the two countries, was visible in the warm and ceremonial reception the Swiss President received.

Affirming the solid bilateral economic cooperation which already exists between the two countries, both leaders agreed on the need to continue negotiating for a new Bilateral Investment Treaty. This promise was made in the backdrop of the Swiss President’s push to resume talks on the EFTA-India Trade and Economic Partnership Agreement, which was initiated in October 2008, and arrive at a satisfactory conclusion. Besides Switzerland, the EFTA countries include Switzerland, Iceland, Norway and Liechtenstein. The Swiss President Doris Leuthard said her country was keen to have India as a “strong economic partner” with a trade agreement and an investment protection framework to be the base of a new era of cooperation.

Clean technology will be one the new key areas of cooperation between the two countries, the two leaders decided. This is driven by the know-how Swiss companies possess to enhance energy efficiency in buildings, for the sustainable development of mountains and capacity building in Smart Cities. A separate Working Group for cooperation has also been constituted for joint training and capacity programmes in the field of Glaciology.

Railways is also emerging as an important area of cooperation as both countries signed two MOUs in the rail sector in the presence of the two leaders. One is in the realm of technical cooperation and the other is to establish an Institute of Tunnel Technology in Goa. Recently, Switzerland made world news when they opened the world’s longest rail tunnel. The second MOU with the Indian railways involves cooperation in areas ranging from traction rolling stock to tilting trains, to modernising railway stations and tunnelling technology.
On the crucial topic of sharing information on tax fraud and tax evasion, both countries again acknowledged the importance of a global level playing field for effective implementation of international standards on tax transparency. In November last year, both countries had signed the Automatic Exchange of Information (AEOI), and the Swiss leader took the opportunity to announce that her country was waiting for clearances before they could start sharing the information from 2019 onwards.

Welcoming the steps taken by the Swiss side to expedite the tax information sharing request by India, the Indian Prime Minister Narendra Modi meanwhile said that he hoped outstanding issues get resolved expeditiously through bilateral dialogue at the competent authority level. He also urged Switzerland to implement the Global Forum on Transparency and Exchange of Information in Tax Matters.

Both countries are also keen to further strengthen their ties in the domain of Internet governance and digitisation. At an Indo-Swiss business meet in New Delhi, President Doris Leuthard had observed, “Internet is evolving at a rapid pace but there is a regulatory gap. How do we close that gap, needs to be deliberated upon. Safer Internet for everyone is the way forward,” she said, inviting India to participate in the 12th UN Internet Governance Forum to be held in Switzerland.

India and Switzerland have long shared similar views on a wide range of international issues and used this visit to express them. One is their support of the Paris agreement of the UN Framework Convention on Climate Change and the need to cooperate in formulating the guidelines by 2018 for the body to function effectively.

Similarly, India and Switzerland urged all countries to work towards disrupting terrorist networks, financing and prevent violent extremism. Both nations feel that global counter terrorism legal framework should be regularly updated to combat this scourge and in this context, called for the early finalisation of the Comprehensive Convention on International Terrorism (CCITA) and implementation of the UN Terrorism Strategy.

Switzerland has always backed India in its bid for membership to the Nuclear Suppliers Group and for the United Nations Security Council non-permanent seat in 2021-22. Both leaders took this opportunity to reaffirm the need for reform of the UN Security Council (UNSC), to suit the geo-political realities of the 21st century. Prime Minister acknowledged the good work done by Switzerland in improving the working methods at the UNSC.

Tourism and hospitality are traditional areas of cooperation. The Indian Prime Minister Narendra Modi however wanted to expand this partnership to include wellness tourism as well, with special emphasis on Ayurveda.
Sister state agreements between Indian states and Swiss Canon cities are on the anvil, for more interaction in academics, cinema and culture, all of which is set to further seal the 70-year-old bond between the two countries.