The informal summit was hosted by India’s Minister of Commerce and Industry, Suresh Prabhu, and attended by WTO’s Director-General Robert Azevedo, as well as representatives from 52 countries, including the USA and China

The meeting was led by India’s support for multilateralism, which includes propagating, maintaining and ensuring a consensus-focused and rules-based global trading system

The New Delhi meeting was primarily focused on boosting agricultural trade and food security; Talks on agriculture trade have been the centrepiece since Doha ministerial in 2001

Welcoming delegates to the New Delhi summit, PM Modi reiterated India’s commitment to a rule-based multilateral trading system, focused on the values of inclusiveness and consensus 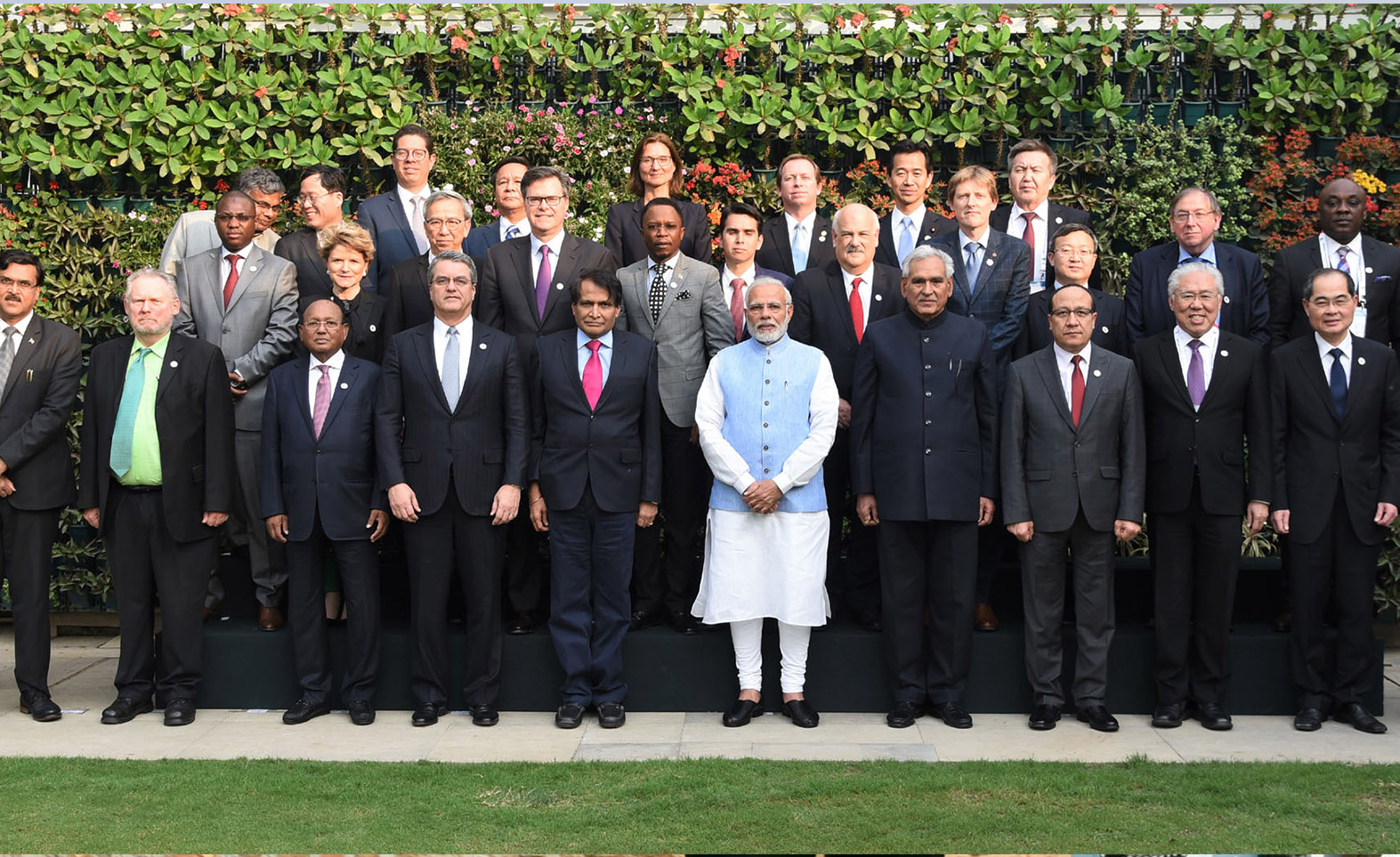 India has traditionally been an active supporter and campaigner for multilateralism, which includes propagating, maintaining and ensuring a consensus-focused and rules-based global trading system. This principle has guided the country’s stand in all its trade negotiations ever since the General Agreement on Tariffs and Trade was folded into the World Trade Organisation (WTO). This standpoint has continued even in the ensuing Uruguay Round of trade negotiations and its successor, Doha Round, which is yet to find satisfactory completion. It is this belief that prompted India to host an informal mini-ministerial in New Delhi on March 20, 2018, to discuss the future of WTO and global trade. The meetings were hosted by India’s Minister of Commerce and Industry, Suresh Prabhu, and attended by WTO’s Director-General Robert Azevedo, as well as representatives from 52 countries, including the USA and China.

The New Delhi meetings took place in the backdrop of intensifying trade unilateralism and certain leading economies erecting tariff barriers, prompting a wave of retaliatory moves by other countries which could eventually imperil the global trading system. The mini-ministerial was also prompted by the lack of any major follow-up action after the success of the last ministerial at Buenos Aires, which now threatens to derail the desired outcomes. The New Delhi meeting was primarily focused on boosting agricultural trade and food security. India’s public stand is that talks on agricultural trade should be prioritized and conclusive because it has a direct bearing on food security and livelihood, especially for the developing countries where a large percentage of the population depends on agriculture for sustenance. Talks on agriculture trade have been the centrepiece of discussions since the start of the Doha ministerial in 2001.

The talks have focused on ironing out the unevenness in agricultural trade rules, which is inimical to interests of the poor and developing economies. The current rules, which the developing nations have demanded should be changed, mandate that a country’s food subsidy bill cannot cross 10 per cent of the value of total crop, based on 1986-88 prices. This rule patently needs revision, especially to adjust it for 30 years of inflation. The added irony is that the agricultural subsidy bill of many rich nations, larger than most developing nations, is exempted from scrutiny. The Doha round of talks unsuccessfully tried to create a level playing field with agricultural trade rules—centred around market access, domestic subsidy and export competition—that are cognisant of income levels in developing countries. The rich nations have, instead, been insisting on inclusion of new issues—such as, e-commerce, trade facilitation (accepted by all countries in the 2013 Bali ministerial) and investment facilitation—as part of the Doha round.

Welcoming the delegates to the New Delhi mini-ministerial, Prime Minister Narendra Modi reiterated India’s commitment to a rule-based multilateral trading system, based on the core principles of inclusiveness and consensus.

PM Modi stresses on development for all

Welcoming the delegates to the New Delhi mini-ministerial, Prime Minister Narendra Modi reiterated India’s commitment to a rule-based multilateral trading system, based on the core principles of inclusiveness and consensus. He said that a robust conflict resolution mechanism is one of the key benefits of the WTO. While noting that decisions taken in the Doha Round and the Bali Ministerial Meeting were yet to be implemented, PM Modi emphasised on the importance of countering the challenges in the multilateral trading system. He also underscored the need for a compassionate approach towards the Least Developed Countries. In fact, when Mr Azavedo visited PM Modi on the eve of the meeting, the Prime Minister said that it was imperative to prioritise WTO’s activities to address the concerns of developing countries.

In his address at the mini-ministerial, Mr Azavedo said: “In assessing the outlook after the 11th WTO Ministerial Conference in December, there are important positives on which we need to build…But if we want to make progress on these vital issues, we need to face up to the problems before us. The pledges of support for the system that we often hear need to be matched by deeds…This is the time to show our support for the trading system…In recent weeks, we have seen the spectre of protectionism rising again…It is also worrying that members are yet to find a solution for the current impasse in the nominations for the Appellate Body. This is a serious concern for us all – as the disputes function underpins the whole trading system…More than ever, we need to keep strengthening the multilateral trading system.”

In his concluding remarks at the summit, Mr Prabhu made a brief summary of the various interventions made during the proceedings of the New Delhi ministerial. While many member-nations raised concerns regarding the need to conclude the agricultural trade issues that includes rules regarding fisheries and cotton, there was unanimity about the “need to preserve and enhance the functioning and credibility of the rules-based multilateral trading system as embodied in the WTO.”

Mr Prabhu concluded by stating: “It was recognised by almost all the participants that it is the collective responsibility of WTO Members to address the challenges facing the system and putting it back on a steady and meaningful way forward so that it continues to serve the people of our countries.”