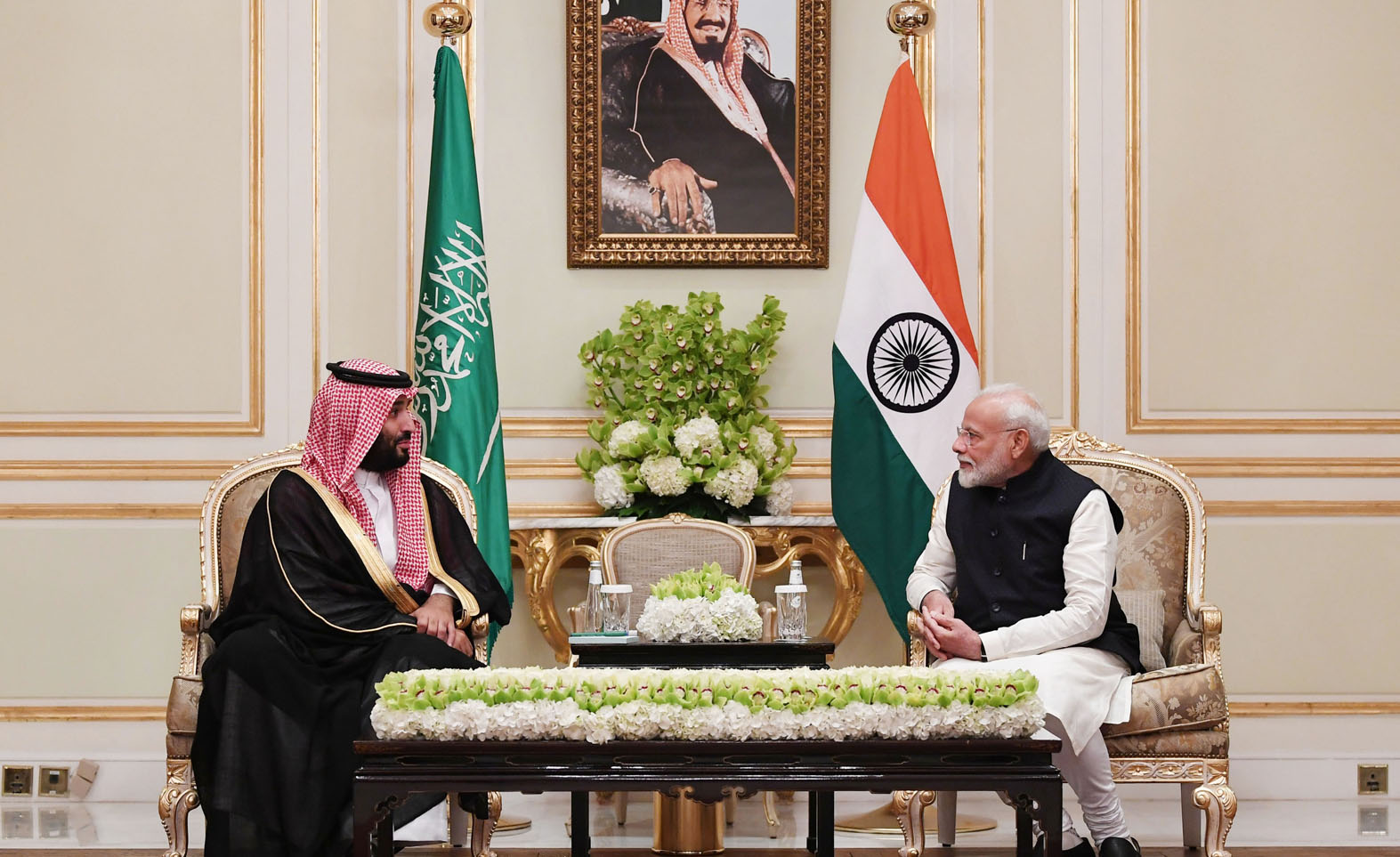 To strengthen and upgrade their strategic relationship, Saudi Arabia and India have set up a Strategic Partnership Council, which is a high-level monitoring mechanism to coordinate matters of major concern between the two countries. To be helmed by the Indian PM Narendra Modi and Saudi Arabia Crown Prince Mohammed bin Salman, the Council comprising of foreign, commerce and industry ministers from both countries, will meet every two years. This was one of the key outcomes of PM Modi’s high-profile visit to Saudi Arabia in the last week of October 2019, his second trip since the NDA came to power in 2014.

Saudi Arabia is the fourth country with which India has an inter-governmental mechanism headed by the Prime Minister. The two countries already share a robust bilateral cooperation in trade, investment, security and defence and the formation of the Strategic Partnership Council is expected to cement age old ties and usher in a “new era of cooperation” across sectors.

Saudi Arabia is India’s 4th largest trade partner (after China, USA and Japan), with a bilateral trade value amounting to US$34 billion in 2018-19, registering an increase of 23.83 per cent. The current bilateral trade (April – August, 2019 provisional figures) meanwhile is valued at US$14.1 billion.

Saudi Arabia is also India’s second largest source of crude oil, as it imports nearly 18 per cent of its crude oil from the oil rich kingdom. India buys 200,000 tonnes of LPG every month from Saudi Arabia. But, as India forges a closer strategic collaboration with the west Asian nation, the relationship has moved beyond being just a buyer-seller one. In his recent visit, PM Modi, told the government newspaper Arab News that Saudi investments are also now going into India’s downstream oil and gas projects.

“India’s relations with Saudi Arabia are one of the most important bilateral relationships in our extended neighborhood”,
said PM Modi to Arab News

PM Modi cited the example of the state run oil company, Saudi Aramco’s participation in a major refinery and petrochemical project at Raigad on India’s west coast. In fact, last year,  Saudi Aramco along with Abu Dhabi National Oil Co (ADNOC), signed an MoU to build the US$44 billion oil refinery along with Maharashtra state run firms. The refinery and associated petrochemical project, which will have a 1.2 million barrels capacity per day, is all set to be a game-changer as it will cater to India’s increasing demand for steady fuel supplies and meet Saudi Arabia and ADNOC’s need to secure regular buyers for their oil.

During PM Modi’s visit, Saudi Aramco also signed an MoU with the Indian Strategic Petroleum Reserves Limited (ISPRL), to store about 4.6 million barrels of oil in its Padur reserve in Karnataka. Economic Times reported that Aramco would have to keep some of the 4.6 million barrels for India’s strategic needs, but could sell the rest to Indian refiners. India, which relies on imports for about 80 per cent of its oil needs, has set up underground emergency storage reserves with a capacity of 36.87 million barrels in three locations to protect against any supply disruption.

This MoU is a result of India wanting global investment to fund its expanding energy infrastructure, while global oil producers are eager to gain a foothold in India, where fuel demand is expected to keep rising as the country’s economy grows.

According to the Ministry of External Affairs, September 2019 note on India-Saudi Arabia bilateral relations, Saudi Aramco has also signed a MoU with the Mumbai based GumPro for setting up a drilling fluids facility in 2018. Meanwhile, Reliance Industries has announced that Saudi Aramco would take over 20 per cent share (US$10-15 billion) in the RIL oil and chemical business at an enterprise value of US$75 billion. Several Saudi companies have invested in India through their non-Saudi subsidiaries.

In his talk at the Davos like forum, the Future Investment Initiative (FII) in Riyadh, PM Modi also urged Saudi companies to invest in India’s energy space saying that the government has set a target of US$100 billion investment in the sector by 2024.

PM’s Call to Invest in India

This is on the energy front. PM Modi threw light on other possible areas of cooperation between the two countries as well. At the well-attended FII Forum, PM Modi invited investors around the world, especially venture funds, to take advantage of India’s start-up ecosystem. PM Modi said, “Today, India has become the world’s 3rd largest start up. The number of unicorns with valuations exceeding US$1 billion is increasing in India. Many of our start-ups are investing globally. Indian start-ups are acing everything, from food delivery to transport, to hospitality, to medical treatment, to tourism.” And, added that he was confident that the investments in innovations in India would give the highest returns.

Other major initiatives  undertaken on the sidelines were the launch of the RuPay card in the Kingdom, which will facilitate payments and remittances by the Indian diaspora; integration of the e-Migrate and e-Thawtheeq portals, to facilitate the process of migration of Indian labour into the Kingdom; and an agreement on training diplomats in respective academies.

India-Saudi Relations: On an Upward Trajectory

India-Saudi relations have been on an upward trajectory since the time King Abdullah bin Abdul Aziz participated as a chief guest in the Republic Day Parade in India in 2006. This historic visit had resulted in the signing of the ‘Delhi Declaration’ giving a fresh momentum to their relationship.  A reciprocal visit by Prime Minister Dr. Manmohan Singh to Saudi Arabia in 2010 had raised the bilateral engagement to ‘Strategic Partnership’ and the ‘Riyadh Declaration’ signed during the visit emphasized the enhanced cooperation in political, economic, security and defence spheres between the two countries.

Further, the highly successful visit of PM Modi in April 2016 consolidated the domains of the existing partnership. Further, the ‘state visit’ honor accorded to the visit of the Saudi Crown Prince Mohammad bin Salman to India in February 2019 cemented the ties in diverse fields. The announcement on Saudi investments worth US$100 billion in India; and identifying India as one of the Kingdom’s eight strategic partner countries under the Crown Prince’s ‘Vision 2030’ among other initiatives, has clearly paved the way for taking their strategic partnership to another level.