There are 6,000 European companies in India, employing around 6.2 million people 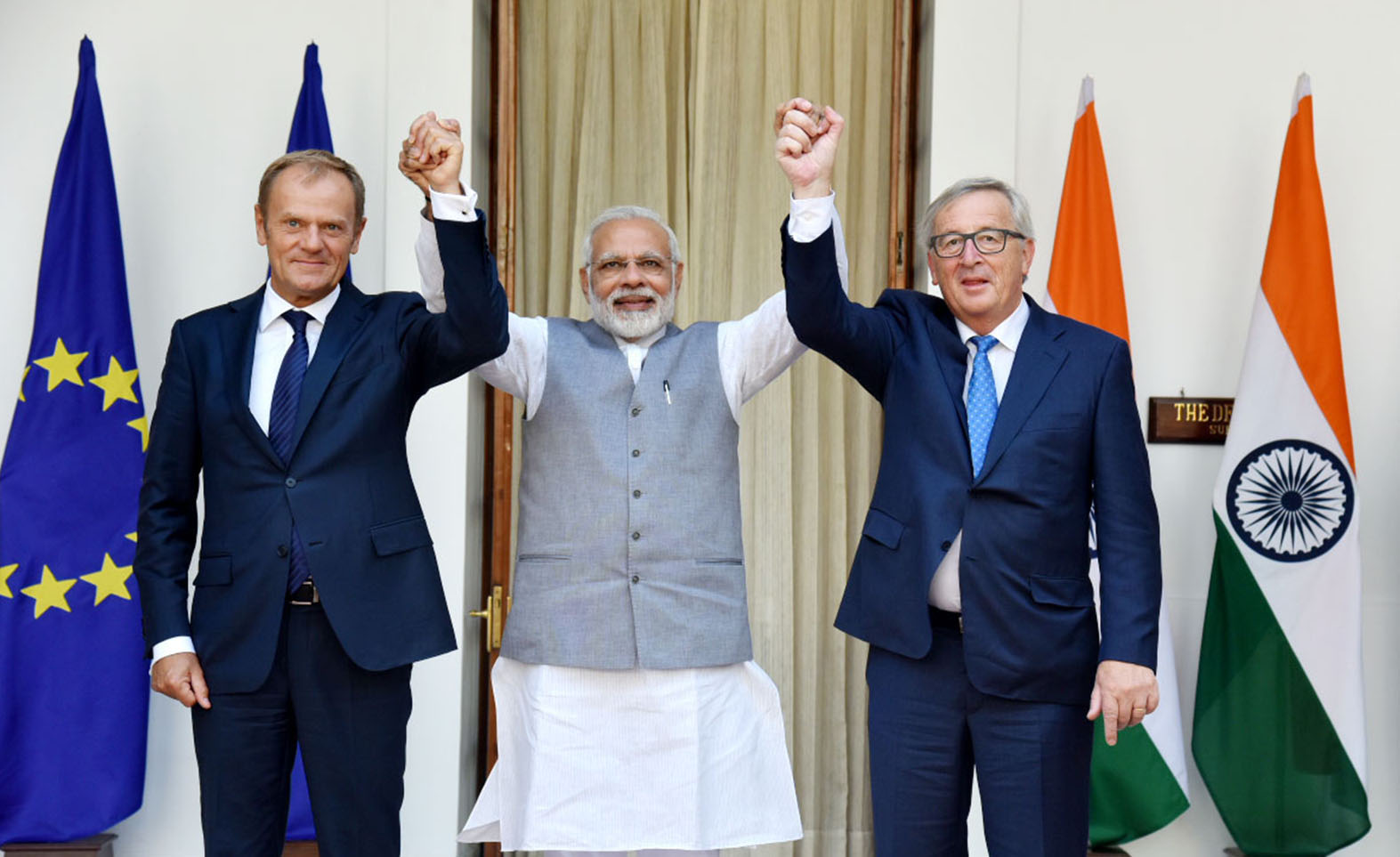 The 14th annual India-EU summit, held in New Delhi on October 6, 2017, ushered in a stronger and more decisive era of bilateral relationship. India was led at the summit by Prime Minister Narendra Modi, while EU was represented by European Council President Donald Tusk and the European Commission President Jean Claude Juncker.

There is much that’s common between India and the European Union (EU). Both are federal structures with an equitable division of power between the Centre and the States. The two also have robust institutional formations that protect and promote democratic practices and both boast of old civilizational ties. The bilateral bond holds special significance because EU is India’s largest trade partner as well as the largest source of foreign direct investment (FDI) after Mauritius.

Annual India-EU trade in goods and services is worth at around EUR 100 billion. Top Indian exports to EU primarily comprise of textiles and clothing, chemical and allied products as well as engineering goods. Meanwhile, the top three EU exports to India are engineering goods, gems and jewellery and chemical and allied products. The total investment stock of European companies in India was valued at EUR51.2 billion in 2015. There are 6,000 European companies operating in India, employing 1.2 million people directly and 5 million indirectly.

Annual India-EU trade in goods and services is worth at around EUR 100 billion. Top Indian exports to EU primarily comprise of textiles and clothing, chemical and allied products as well as engineering goods

Speaking at the summit, Prime Minister Modi said, “India values her multi­-faceted partnership with the EU, and we attach high importance to our strategic partnership…We are also committed to working with the EU to further deepen our cooperation in strengthening our trade and investment flows.”

The latest deals and partnerships

Two marquee deals were signed during the summit. European Investment Bank (EIB) has committed to lend EUR500 million—the bank’s largest to India till date–to the Bangalore Metro project, which will include construction of a new line, acquisition of new trains and construction of both underground and elevated stations. EIB’s total financial commitment for India during 2017 is EUR 1.4 billion.

Under the second deal, EIB will provide EUR 200 million to India’s largest commercial bank, State Bank of India, to support solar power schemes across the country. In fact, EIB has already provided EUR 1.2 billion credit to support energy and climate-related projects in India. A joint statement on clean energy and climate change between India and EU also notes that both sides will continue their partnership in developing offshore wind with the help of EIB. The other areas of cooperation will include renewable energy, energy efficiency, smart grids and water management.

The summit also saw EIB entering into a new partnership with the International Solar Alliance, which includes a record EUR800 million for renewable energy investment to help solar rich members of the Alliance develop and deploy affordable solar energy. EIB is a multilateral bank owned by the EU’s member states and it provides loans as well as guarantees, microfinancing and equity investment.

India and EU have also entered an agreement for smart and sustainable urbanisation. Many other agreements were signed and new partnerships forged related to telecom, civil aviation, water management and pharmaceuticals, among others. Among the various issues discussed between the leaders were a review of the India-EU Agenda for Action 2020, a roadmap for bilateral cooperation signed during the 13th annual summit in Brussels last year, and the India-EU Strategic Partnership.

India and EU have multiple issues pending on their joint to-do list and the complexity of the issues will require detailed negotiations. However, leaders on both sides have expressed satisfaction with the progress made so far, including relaunching negotiations for a comprehensive India-EU Broad Based Trade and Investment Agreement.