India-Australia strategic relationship is core to the prosperity and stability of the Asia Pacific and the Indian Ocean regions.

Australia’s cumulative investment in India is about US$10.74 billion and India’s total investment in Australia is US$10.5 billion.

India, Australia to boost ties in S&T research and committed to a new phase of Australia-India Strategic Research Fund. 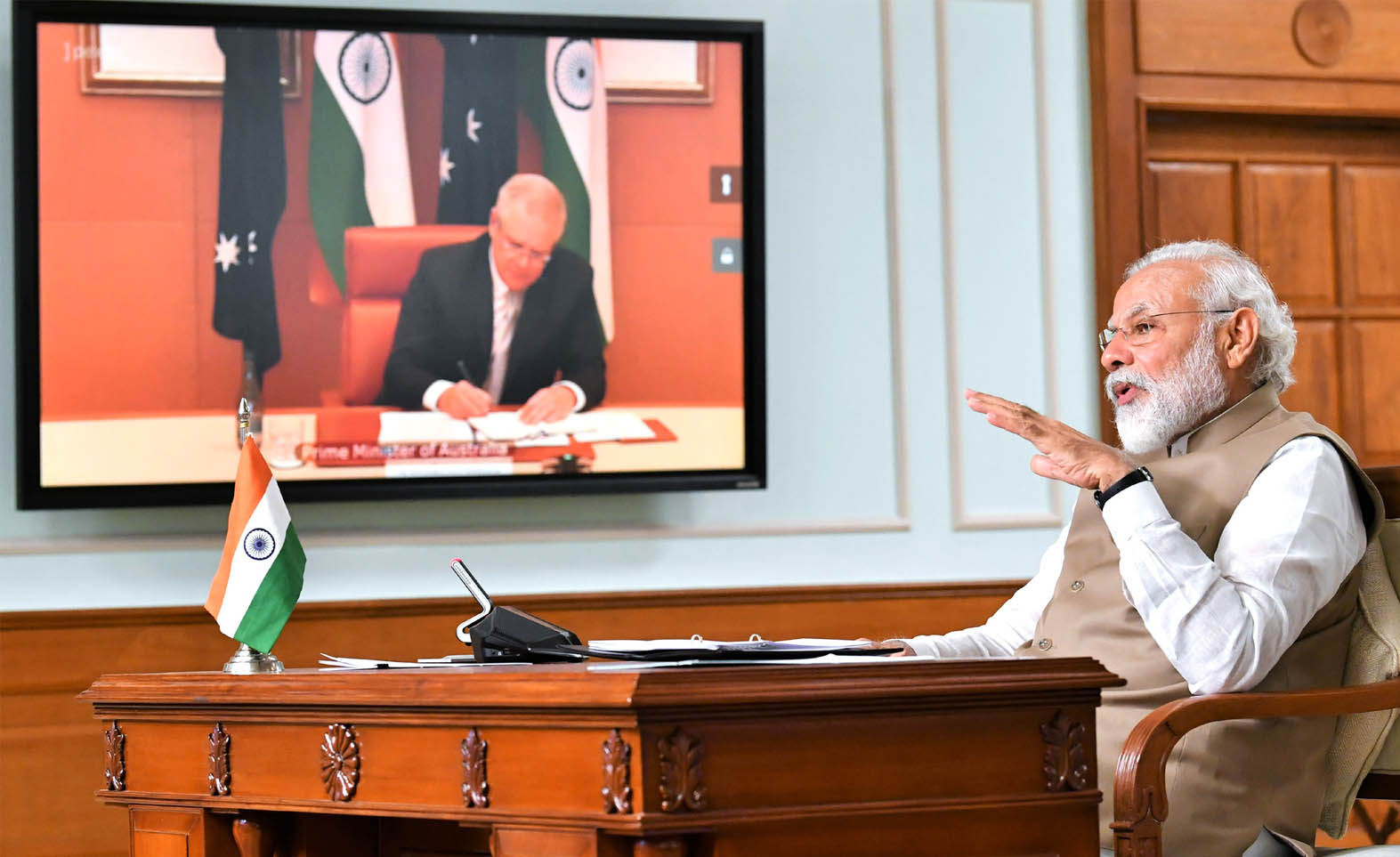 Indian Prime Minister Shri Narendra Modi and his Australian counterpart Scott Morrison participated in an India-Australia Leaders’ Virtual Summit on June 4 that sought to strengthen bilateral ties in a changing world. Among other key subjects of mutual interest, the two leaders discussed a coordinated response to COVID-19 and initiatives to build a prosperous, open, and stable post-pandemic world. India-Australia bilateral relationship has recorded a steady evolution, led by expanding economic activities and increasing high-level interactions, developing into a strategic partnership. Engagement between the two nations has grown over the years to include new avenues of cultural and commercial exchanges as well as partnerships across the spaces of energy and resources to defence and security, among others. Today, there are over 90,000 Indian students in Australia while several Australian cricket players have found opportunities in the Indian professional cricket league. There’s no bound to the limits of the ties.

India-Australia strategic relationship is core to the prosperity and stability of the Asia Pacific and the Indian Ocean regions. To this end, the two countries have expanded their partnership to boost regional trade and security. Over the years, India and Australia have employed an array of institutional mechanisms to promote bilateral cooperation, including a Joint Declaration on Security Cooperation in 2009, Joint Trade and Commerce Ministerial Commission, India-Australia ‘2+2’ Foreign and Defence Secretaries Dialogue, Defence Policy Talks, Australia-India Education Council, Energy Security Dialogue, among others. These mechanisms have driven opportunities across the scope of bilateral trade and investment, as well as collaborations in civil nuclear energy, defence and security, agriculture, minerals and resources, science and technology, skill development, and tourism. With all these engagements, India has emerged to the front rank of Australia’s international partnerships, as per an Australian foreign policy white paper.

At the meeting, the two sides reiterated the importance of cooperation in saving lives and managing the economic impact of COVID-19. The leaders resolved to boost ties in S&T research and committed to a new phase of the Australia-India Strategic Research Fund to promote future innovations, to be preceded by a one-off Special COVID-19 Collaboration Round in 2020. The two countries have decided to jointly strengthen and diversify supply chains for critical health and other goods and services while partnering in the areas of the digital economy, cybersecurity, and critical and emerging technologies. The two countries also resolved to expand their existing partnership in mining and processing of minerals with the latest technologies. These and other agreements are expected to boost India-Australia bilateral trade which was recorded at around US$21 billion in 2018-19. Meanwhile, Australia’s cumulative investment in India has been about US$10.74 billion whereas India’s total investment in Australia is US$10.5 billion.

India and Australia have agreed to boost coordination in the maritime space as encapsulated in the Joint Declaration on a Shared Vision for Maritime Cooperation in the Indo-Pacific. The updated arrangements will facilitate deeper engagement between the two countries including maritime domain awareness and expanded linkages between the maritime agencies. The two countries reiterated their commitment to work with partners and relevant regional organisations across the Indo-Pacific, including the ASEAN. In this regard, Australia extended support to India’s Indo-Pacific Oceans Initiative (IPOI) which will promote better coordination and cooperation among the countries in the region on maritime-related issues. India and Australia also agreed to broaden defence cooperation by enhancing the scope of military exercises and other activities to address shared security challenges. The two nations, along with Japan and the US, currently make up the Quadrilateral Security Dialogue that has been driving multifaceted cooperation.

Affirming their commitment to strengthening relations for the long term, at the summit, the two nations committed to elevating the bilateral Strategic Partnership concluded in 2009 to a Comprehensive Strategic Partnership (CSP). This reflects India and Australia’s commitment to global cooperation to address major challenges like COVID-19. The CSP is in line with India’s growing engagement in the Indo-Pacific region and Australia’s Indo-Pacific approach and Pacific Step-Up for the South Pacific. The summit announced the following joint declarations, MoUs, and arrangements: