On the occasion, the Indian side was assured that ongoing bilateral contracts will not just be maintained, in a number of cases will be taken forward in a shorter time

President Putin is scheduled to visit India at the invitation of PM Modi later this year. Bilateral trade between the two nations was recorded at US$10.1 billion in 2019-20 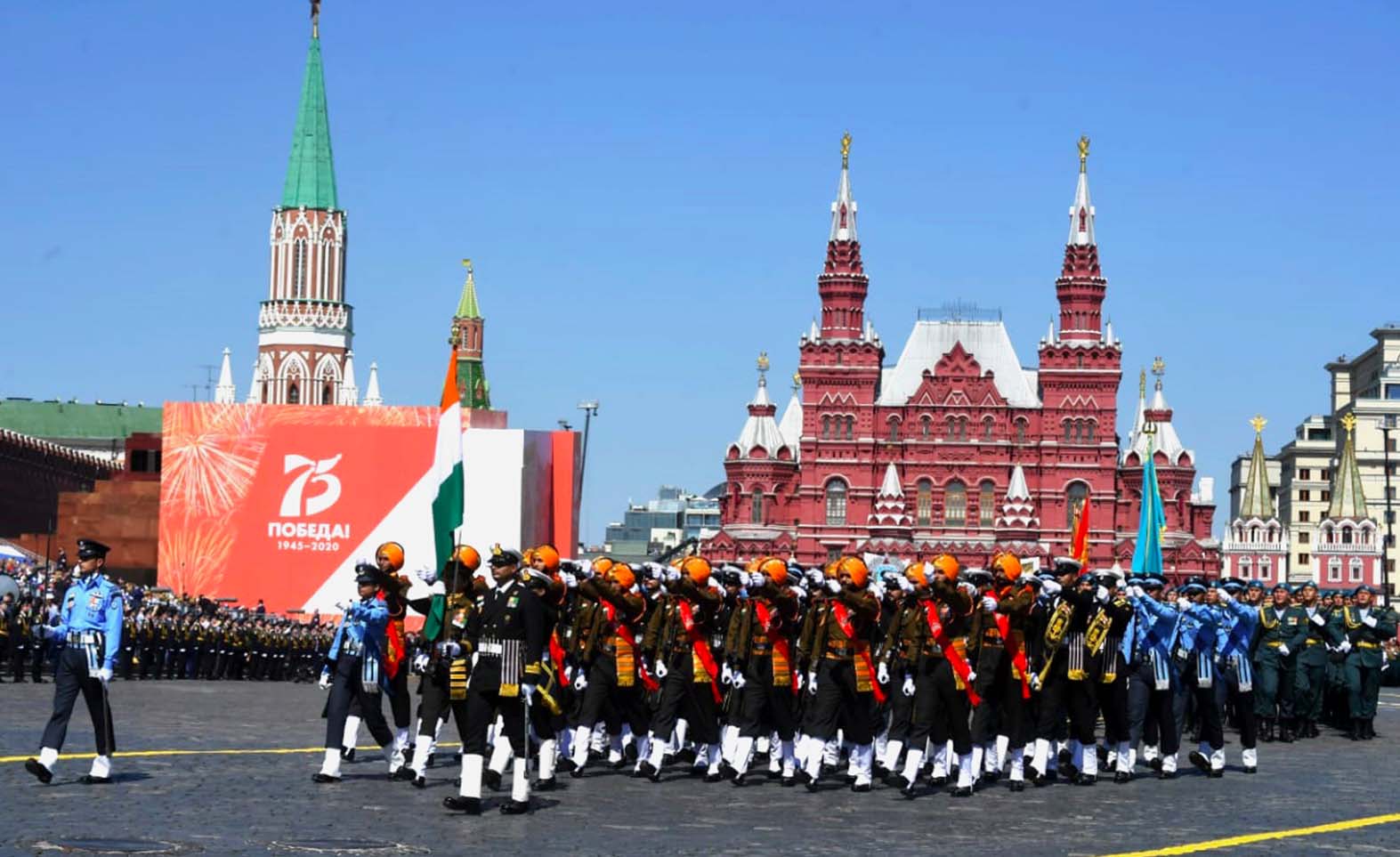 Indian Defence Minister Shri Rajnath Singh visited Moscow in the last week of June to attend the Victory Parade that commemorated the 75th anniversary of the Second World War. The Parade was organised to honour the heroism and sacrifices of the Russian and other friendly forces. The Indian team at the event included a Tri-Service 75-member Indian Military contingent that participated in the Parade along with the Russian and other invited contingents. The marching contingent that took part in the Parade was led by a major rank officer of the gallant Sikh Light Infantry Regiment. The Regiment had fought with valour in the World War II and has the proud distinction of earning four Battle Honours and two Military Cross amongst other gallantry awards. The Indian participation followed an invitation from Russia’s Defence Minister of Russia, Sergey Shoigu, to Minister Singh. The Parade was originally scheduled to be held in May but was postponed due to the COVID-19 pandemic.

The Indian participation in the Victory Day parade offered a tribute to the great sacrifices made by Russia and other nations in the Second World War in which Indian soldiers also participated and made supreme sacrifice. Prime Minister Shri Narendra Modi had previously congratulated Russian President Vladimir Putin on the occasion. Now the visit of Minister Singh is expected to further strengthen the longstanding and privileged strategic partnership between India and Russia. The Victory Parade marked another key milestone in the India-Russia partnership, which today spans across the scope of defence and security to energy and nuclear power. During his visit, Minister Singh reviewed India-Russia defence cooperation with Yury Borisov, Russia’s Deputy Prime Minister. Mr. Borisov is the co-chair of the Inter-Governmental Commission with India on Trade, Economic & Scientific Cooperation. Minister Singh and Mr. Borisov also co-chair the High-Level Committee on Science & Technology.

Russia is one of India’s oldest and most trusted global partners. Bilateral trade between the two nations was recorded at US$10.1 billion during 2019-20.

On the occasion, Minister Singh said that despite the difficulties of the COVID-19 pandemic, India-Russia bilateral relations were keeping good contacts at various levels. He added that the Indian side has been assured that ongoing contracts will not just be maintained, in a number of cases will be taken forward in a shorter time. Earlier this year, Indian and Russian defence firms had signed as many as 14 preliminary agreements during the 5th India-Russia Military Industrial Conference (IRMIC) held on the sidelines of Defexpo-2020 at Lucknow, India, in February 2020. On the occasion, the first ‘request for proposal’ for the manufacturing of parts in India under an Inter-Governmental Agreement (IGA) was also handed over by the Indian Navy to the identified Indian industry. The agreement, signed in 2019, provides the basis for the partnership between Russian OEMs and the Indian industry for the manufacturing of spare parts of Russian origin equipment in use by the Indian defence forces.

Russia is one of India’s oldest and most trusted global partners. In November 2019, Minister Singh while inaugurating the India-Russia Defence Industry Cooperation Conference in Moscow had addressed the CEOs of OEM companies, stating that the Government of India encourages Russian OEMs to partner with Indian entities which could help reduce manufacturing costs and supply timelines. India-Russia tie-up in defence manufacturing has benefited both nations, greatly improving exports to third party countries. Defense manufacturing partnership between the two nations is built on a strong history of aerospace and defense collaborations that has stood the test of time. Since the signing of the IGA, the Indian side has taken a number of steps to expedite collaboration between Indian and Russian companies, and the Government of India now looks forward to expansion in local manufacturing. Bilateral trade between the two nations was recorded at US$10.1 billion during 2019-20.

Beyond defence, strong Indian-Russia ties have led to steady value creation related to oil and gas as well as nuclear energy. In May 2020, the Minister of Petroleum and Natural Gas and Steel, Shri Dharmendra Pradhan, had held a discussion with Alexander Novak, the Russian Minister of Energy. The key meeting touched upon the current global oil and gas scenario and reviewed bilateral cooperation in the oil and gas sector as well as in the coking coal industry. Sourcing of Russian oil through long term contracts is a part of India’s broader plan for diversifying oil supplies from non-OPEC countries. On the occasion, the two ministers reviewed the ongoing projects between the two countries including the Indian partnership with Rosneft in the Vostok Project, Novatek’s supplies of LNG to India, cooperation between GAIL and Gazprom, India’s joint projects with Gazprom Neft, the supply of crude oil by Rosneft to Indian Oil, etc. These partnerships have broadened the scope of future activities.