When the iconic Burberry trench coat was redesigned using Maheshwari Silk, it brought home the fact that Indian Handloom has carved a space for itself in the world of international haute couture

Over the past decade, several international design houses such as Burberry, Louis Vuitton, Alberta Ferretti, among others, have incorporated Indian handloom in their collections

Luxury Indian brands such as Sabyasachi, SGBG Atelier, Abraham & Thakore, among others, have heavily adopted handloom in their work that has seen strong demand worldwide

Each of India’s 29 states and 7 union territories have their own multiple handloom weaving traditions; Owing to its traditional roots, no two handloom pieces are exact replicas

Driven by promotional measures, export of handloom products from India rose to US$355.9 million during 2017-18, with USA, UK, Spain, Italy, France being the biggest market 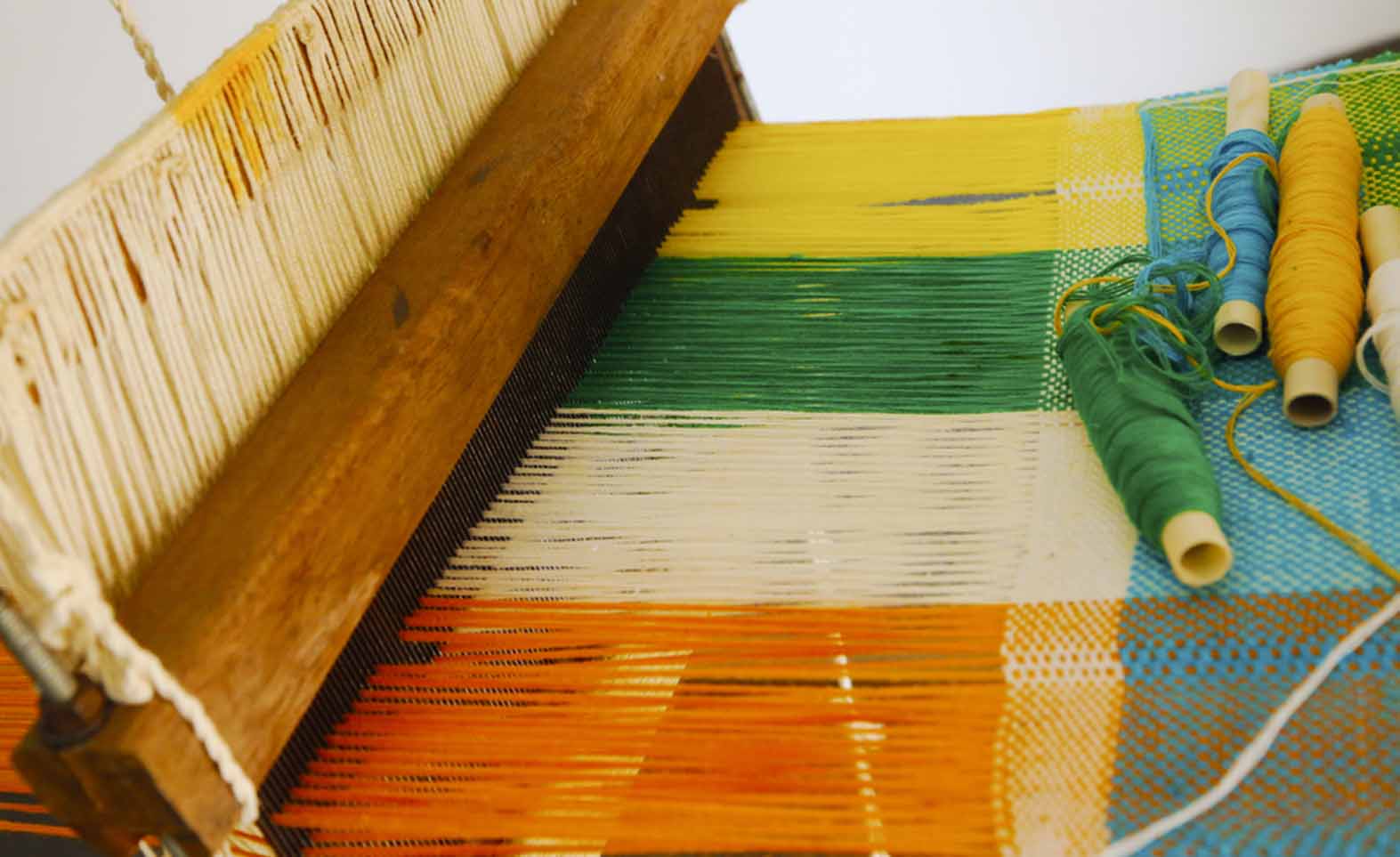 When UK’s luxury brand Burberry refashioned its iconic trench coat using Maheshwari Silk, it brought home the fact that Indian Handloom has carved a space for itself in the world of international haute couture. Inspired by India’s elegant fabrics and Western design sensibilities, French luxury fashion house Louis Vuitton also experimented with silk weaves from Banaras to create stunning sari dresses for the brand’s Diwali collection in 2010. The brand used a specially woven ‘Louis Vuitton fabric’, with a mix of monogrammed flowers and Indian traditional motifs. For the collection, Louis Vuitton hired master craftsmen from India to weave the custom fabrics and incorporate the Louis Vuitton logo into them. In the past decade, there have been many such collaborations between international design houses and Indian weavers. Alberta Ferretti, DKNY and Ryoko Haraguchi are just some among them.

Truth be told, long before Burberry and Louis Vuitton, a variety of rich handloom fabrics from India have been clothing the royals, heads of states as well as leading personalities from entertainment and business. Dhaka Mulmul, a type of cotton from undivided India which reportedly felt like ‘the light vapours of dawn’, the finest silks and the softest cottons made their way across the mountains and seas to far off lands much before the missionaries reached the corners of the Earth. The nation’s textile tradition has been ancient and diverse. Building on the rich heritage, India has emerged as the only place where handloom fabrics are produced on a commercial scale. In fact, nearly 95 per cent of the world’s handwoven fabric comes from India. While similar sectors from other parts of the world have pulled their shutters down, Indian handlooms has powered on owing to its deep-rooted values.

Handloom sector is the second largest employer for rural India after agriculture and employs over 4.3 million weavers and allied workers. In many parts of rural India, which covers around 70 per cent of the nation, almost every house has a loom, where all the family members weave handloom fabrics. As a result, the capital cost of the handloom industry is considerably lower than that of most small scale industries, and it is also an eco-friendly industry as the materials used are naturally sourced and and the engineering is powered manually. In addition to different kinds of cotton fabric, Khadi, jute, linen and giant Himalayan nettle fibre, India produces special silk handloom weaves such as Tussar, Mashru, Mulberry, Eri, Muga and Ahimsa; woollen handwoven fabrics such as Pashmina, Shahtoosh, Phiran, Cashmere, Angora and a special waterproof wool woven by tribals in Kashmir and Ladakh.

Each of India’s 29 states and 7 union territories have their own handloom weaving techniques and traditions. In fact, some states have more than one unique handwoven or embellished textile to their credit. For example, Gujarat, handloom weavers practice Patola weaving, Ajrak prints, Bandhini tying and dyeing, Mashru weaving and Matani printing. Then, there are the different hand embroideries of Kutch and Saurashtra such as Ari, Abhala and Kathi. Similarly, weavers from Tamil Nadu are renowned for Madurai Sungudi, Karaikudi Chettinad, Vadamanapakkam Kanchi cottons, Tirunelveli Cheddibutta and the much famed Kanchipuram silk. Handloom products such as muslins of Chanderi, Phulkari and Khes of Punjab, brocades of Varanasi, Ikats from Andhra Pradesh and Orissa, the tie and dye from Rajasthan and Gujarat, the jacquards from Uttar Pradesh have become famous all over the world.

Driven by the promotional measures, export of handloom products from India rose to US$355.9 million during fiscal year 2017-18, with USA being the biggest market

Over the years, Indian handlooms have come to be associated with their unique design and texture, brilliant use of natural colors and dyes as well as for their exotic embellishment. Additionally, owing to the traditional methods employed in handloom, no two pieces are exact replicas of the other. The products truly take the value of an asset for the consumer. The government has proactively taken up campaigns to popularise handloom among the young generations. Hence, Khadi, India’s signature textile, symbolic of the country’s freedom struggle, has taken a life of its own. Not only has output of Khadi gone up by over 133 per cent in the past four years, Khadi is also sashaying up the global ramp. This aside, the Indian and English cricket captains recently wore a unique Khadi poppy to recognise the role played by Indian soldiers during the First World War at a British Armed Forces Charity Event.

India’s handloom industry has become attractive to collaborators and importers for many reasons. Extensive variety of hand-woven fabrics from across the nation fetch premium prices in international markets. As a result, investment has come in different forms – multinationals such as Microsoft have routed CSR funds to revive Telangana’s famous Pochampally and Narayanpet weaving traditions. The company has worked with NGOs and conducts workshops to train young weavers to develop natural dyeing and design skills. The aim is to assure weavers that handloom can be a source of sustainable livelihood. They have also trained weavers in basic digital skills, communication and business skills, to help them market their textiles. Driven by the promotional measures, export of handloom products from India rose to US$355.9 million during fiscal year 2017-18, with USA being the biggest market.

Apart from USA, the major buyers of Indian handloom have been UK, Spain, Italy, Germany, France, UAE, the Netherlands, Australia and Japan. Herein, the Handloom Export Promotion Council (HEPC) has been set up under the Ministry of Textiles to promote export of all handlooms products such as fabrics, home furnishings, carpets and floor coverings. HEPC’s membership currently stands at more than 2,000. Foreign direct investment is also pouring in to set up textile clusters as well as research and development initiatives. Recently, the trend has been to mix old designs with new techniques to create original products. Such steps have been backed by strong capacity in handloom space with about 2.4 million looms of varied designs and construction. Cloth production over April-November 2017 was reported at 5.1 billion sq meters, with nearly 15 per cent represented by handloom.

To empower handloom weavers, Government has also set up the National Handloom Development Programme (NHDP), the Yarn Supply Scheme (YSS), the Handloom Weavers’ Comprehensive Welfare Scheme (HWCWS), and the Comprehensive Handloom Cluster Development Scheme (CHCDS) for development of eight large handloom clusters. There are also collaborations between international designers and fashion houses, NGOs and handloom promoting organizations. In fact, designers from international brands have been visiting India, interacting with weavers and encouraging them to experiment with colours, yarns and size of the fabrics to revive old traditions and weave new designs. Amazon India, while expanding into handloom has added Government-supported Weavesmart to its platform. The retailer engages with almost 1,100 weaver cooperatives from across 11 Indian states.

While, India’s main handloom clusters have been centred around Varanasi, Sivasagar, Murshidabad, Godda, Virudhunagar, Prakasham, Guntur, Tiruchirappalli and Bhagalpur, even in remote parts of India, one will find weavers working their magic on traditional fabric. The advantage India has over other countries is that the nation manages the end-to-end product cycle – from seed or cocoon to plant, to yarn, to woven fabric, to stitched garments, to embellishment. Also, manpower, artistry and expertise is available in plenty. As a result, luxury Indian brands such as Sabyasachi, SGBG Atelier, Abraham & Thakore, among many others, have been adopting handloom for their collections that are being exported worldwide. With vast traditional capacity, stronger financing and promotions can help unlock massive income opportunities for a cross-section of stakeholders in the handloom space.